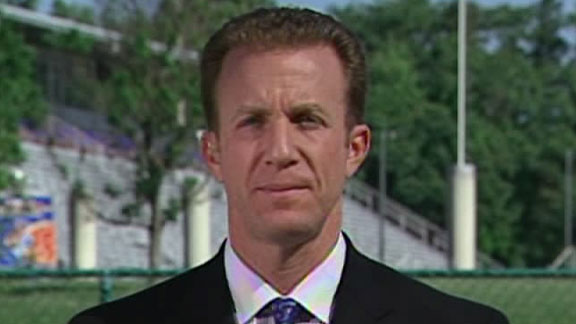 You simply have to love Mike Tomlin.

Let’s just say that the coach of the Black and Gold was more than ready today when ESPN talking head Bob Holtzman asked a question during the Wednesday press conferences.

If you recall, Holtzman is the dolt that reported last week that the Steelers might use a trick play against the Ravens on Saturday. That trick play (minus maybe a WR reverse to Mike Wallace that failed) never came. Could it come this week? That remains to be seen, but back to today.

Tomlin’s answer – a classic. “It depends on whether or not you give him my plays, you know,” the coach said. Let’s just say that the glare that Tomlin was giving the reporter should have sent a message about how not happy he was about Holtzman’s “reporting” of a week ago.

Prior to the Ravens game, Holtzman reported: “Two Steelers have told me, if they catch the Ravens in the right defense, they have a trick play ready to go today that they’ve never run before,” said Holtzman, noting that someone who usually doesn’t throw the ball would be called upon.

Way to go Holtzman, you can bet the Steelers and their players won’t be saying much to you from now on. Way to blow the trust of a team and breaking rule 101 of reporting.