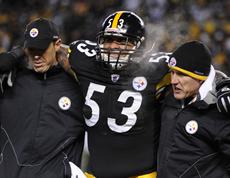 While it wasn’t a good sight to see rookie Pro Bowl center Maurkice Pouncey in a cast on crutches Wednesday, there was still hope that with plenty of time before the game, he would be able to play in Super Bowl XLV.

According to one Steeler veteran OL, that won’t happen. Guard Chris Keomeatu declared today that Pouncey will not play in the game after suffering a left ankle sprain vs the Jets in the AFC Title game.

“We are definitely sad that he won’t be able to be with us in the Super Bowl,” Kemoeatu told the Pittsburgh Tribune-Review. “Definitely I feel bad for him. We just have to win it for him. .. We know how big this is for him and him not being able to play is definitely motivating for us to go out there and get that ring for him.”

If Pouncey is sidelined for the title game, Doug Legursky will play in his spot. He played well in the Jets game, but there were two fumbled snaps between he and Ben Roethlisberger, the second resulting in a Jets safety to make it 24-12 in the fourth quarter.