Bradshaw Does a 180 Heaping Praise on QB Roethlisberger 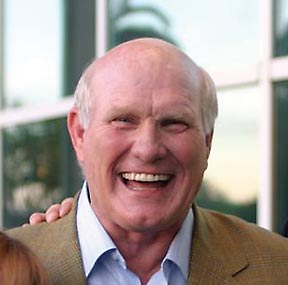 The last time he spoke about him, he lashed out at him.

Now he seems to be giving him praise.

That’s HOF and former Steelers QB Terry Bradshaw, who has in the past been critical of current Steelers Ben Roethlisberger in light of the off-the-field issues — namely a second sexual assault allegation that resulted in a four-game suspension.

What Bradshaw is saying now though seems to be a lot different than before, liking what he sees just a week before the Steelers play Green Bay in Super Bowl XLV.

“Ben does it with strength,” Bradshaw said this week during a media conference call. “He’s very strong with great presence in the pocket and only moves when he has pressure. Last week against the Jets, he did a spin move that I would show to young quarterbacks and say, ‘You either have this or you don’t.’ It’s basically a feel and great quarterbacks have it.

“We know about Ben’s off-the-field problems and that can hurt you with your football team. He seems to have been able to mend that. After he had his suspension, he came back and played rejuvenated and rededicated. He appears to have really straightened himself out. That’s good for him. He’s a superstar in this league and we need our superstars to be held accountable. Hopefully that’s what’s happening with him.”

If the Steelers beat Green Bay, Roethlisberger will tie Tom Brady and Joe Montana with three Super Bowl rings. He will still trail Bradshaw by one ring, but has plenty of time to try and get that 4th one.

Packers – Steelers: Who Has the Better WR Core?
AFC Champs Touch Down in Dallas for Super Bowl XLV