Mendenhall Takes a Beating for Comments Pushing the NFL-Slavery Button 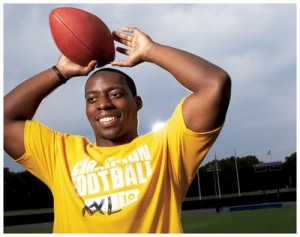 Seems that lately NFL players are starting to try and make comparisons of the current NFL lockout to that of slavery. First it was Adrian Peterson, Vikings running back, who said via Twitter – “It’s modern-day slavery, you know?”

Then it was Steelers RB Rashard Mendenhall, who opened up another can of worms with the following Tweet. “Anyone with knowledge of the slave trade and the NFL could say that these two parallel each other.”

Mendenhall took a lot of shot for the comments, and now is trying to explain what he meant by the comments, stating that he in no way meant the NFL was like slavery.

“If you look back and dissect what I said, I [didn’t] say that the NFL was slavery, I said that they parallel each other. Look up the word parallel.”

“This means that they’re not the same thing, but they run the same course. These paths will never cross, but they mirror each other.”

“I could break down how, but that would take an amount of ideology and big words that a lot of you wouldn’t understand.”

Mendenhall in the past has been nothing but well spoken and usually is a good interview. Why he would try to jump on Peterson’s comments is beyond me. Seems that this lockout is starting to get the better of players to the point where they have lost their minds and are starting to say things that make no sense whatsoever.

Hopefully the rash of feedback that Mendenhall is getting will tell him that he should just do what most players are doing – stay quiet and let this thing play out.