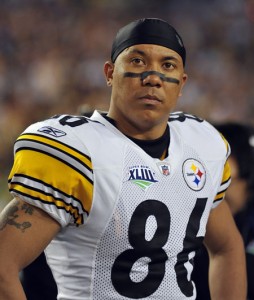 Hines Ward is speaking out about the latest awful decision by running back Rashard Mendenhall, who got in hot water over tweets sent out following the killing of Osama Bin Laden.

While the running back has said he’s sorry for offending people by the tweets, it wasn’t enough to save his sponsorship with Champion, who dumped him.

“Everybody’s entitled to their opinion,” Ward said to ESPN. “But that wasn’t a good opinion.”

The Steelers all-time leading wide out says that while you can have your own opinion, a lot of times it’s better to keep those opinions to yourself.

“If that’s your opinion leave it as your opinion,” Ward said. “When you tweet that out there, you have to deal with the backlashes that come with that. You put everybody out there because everywhere we go we get asked questions about the comments you made. When you tweet like that, you’ve got to be careful. I’m not a big tweeter because sometimes your emotions get caught up, you speak your mind and it’s not always the best thing to say.”