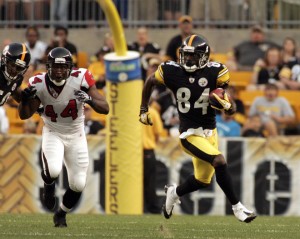 If the Steelers offense is as good in 2011 as it was for the first 30 minutes of Saturday’s preseason game – it’s going to be a very good year.

Against a team that won 13 games in the regular season a year ago, the Steelers went up and down the field against the Atlanta Falcons, scoring 24 first half points enroute to a 34-16 win.

The game did have it’s costs, as the Steelers lost backup QB Byron Leftwich for with a broken arm, and also there were injuries to starting center Maurkice Pouncey and NT Casey Hampton. Pouncey exited with a left ankle injury, and Hampton left with a right elbow injury. Cornerback Keenan Lewis left early with a knee injury.

On the positive side, Ben Roethlisberger completed 11-of-16 passes for 214 yards and two touchdowns, and one of the young money wide outs – Antonio Brown, had a big night, pulling in both of Roethlisberger’s touchdown passes — 77 and 44 yards. The second-year pro out of Central Michigan ended with four catches for 137 yards.

Crezdon Butler returned an interception 95 yards for a touchdown in the victory.

Late in the third quarter, Leftwich scrambled to his right for six yards. Atlanta linebacker Stephen Nicholas took down Leftwich, who landed on the turf awkwardly. The QB set to be Roethlisberger’s backup screamed in pain and flung his helmet.

The defense had to put up with Matt Ryan of the Falcons throwing the ball on just about every play. He connected on 22-of-42 passes for 220 yards, a touchdown and an interception for the Falcons. It was odd to see a QB throw as much as that in a preseason game, but the Steelers were up to the task leading 24-16 at half.

Chris Redman completed 8-of-18 passes for 89 yards and a pick for the Falcons as they tried to rally in the second half. Roddy White hauled in eight passes for 101 yards and a touchdown in defeat.

After losing their preseason opener to the Redskins, the Steelers have come out with a vengeance in the last two preseason games against two of the NFC’s best – the Eagles and Falcons. They outscored the two teams by a total of 58 to 30.

Now the team will have to lick their wounds and figure out how long the players hurt will be out for. They will be back in action at Carolina against Cam Newton and the Panthers in the final preseason game on Thursday at 8pm.