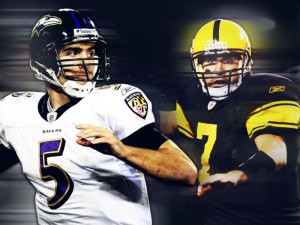 1. What position concerns you the most for the Ravens heading into 2011?

The Offensive line is still the area that concerns me the most with this team. I think the Ravens have done a good job in the past few weeks clogging up some pretty gaping holes during the Pre-season. They acquired two veterans in Bryant McKinnie and Andre Gurode. They moved Michael Oher back to the Right side, a position that he had more success in as a rookie.They have a pair of talented Guards in Marshal Yanda and Ben Grubbs. This could be the best Offensive line they’ve ever had but they haven’t even played together for one snap. There are still a lot of unanswered questions about this group. Do the vets have anything left? Will Oher transition smoothly back to the right? Is Marshal Yanda healthy? Matt Birk has already contemplated retirement and he’s been injured all Pre-season – is it the end of the line for him? There’s cause for concern here when you have a team that loves to blitz from all angles like Pittsburgh coming in for the season opener.

2. You’ve written that you think the Ravens entering 2011 are not as good as a season ago – what is the biggest factor to leading you to that statement, and if that’s the case, what do you see as a season record for the Ravens in 2011?

Yes, I’ll admit now that I was a little hasty with that assessment. But at the time the Ravens had released four proven veterans (Mason, Heap, Gregg, McGahee) who had all been a big part of their success over the years and only saw one player (Terrence Cody) in place as a successor. Meanwhile the cap had them strapped and while they sat and waited, other teams improved or retained their own. The tipping point for me was the signing of Safety Bernard Pollard. I think he’s a hard hitter and a good player but I wondered with two safeties already on the roster and with many other holes needing to filled why that was a need.

However a lot has happened in the weeks since then. They FINALLY nabbed a true deep threat in Lee Evans, something I’ve been begging for for years. Ricky Williams is a solid back-up to Ray Rice. Vonta Leach is backfield hammer that will greatly improve the running game. The Offensive line I already addressed. The Defense has seen a slew of young players looking to step in around Ray Lewis and Ed Reed.

The line has youngsters like Cody, Arthur Jones and rookie Pernell McPhee ready to make their mark. While Sergio Kindle appears fully recovered from his skull trauma from a year ago and Paul Kruger seemingly has turned the corner in his third season as blitzers off the edge. The corners seem ready to go young too as rookie Jimmy Smith and 26-year old Cary Williams appear slated to start. Perhaps the biggest change was installing Chuck Pagano as the Defensive coordinator. Greg Mattison did a fine job but often he was too passive for fans’ tastes. Pagano will be aggressive.

At first glance it appears that the Ravens have some soft match-ups that they can exploit such as the Titans in Week Two and the 49ers in November for the Harbaugh Bowl. Playing the rebuilding Browns and Bengals twice helps as well. With all the new faces there will be a learning curve and I wouldn’t be surprised if they stumble out of the gate right away. But the schedule looks helpful and I think the way they constructed the roster could make them better than last season in the long run. If all goes right they could still end up a 9 to 10 game winner with a possible return to the playoffs.

3. There seems to be a lot of pressure on Joe Flacco this season to perform, do you think he will step up, and if he doesn’t can the Ravens have a successful year?

There was a ton of heat on Joe Flacco this off-season both nationally and locally. I still don’t get it though. He’s improved every year and quarterbacked the team to 3 straight playoff appearances while playing in every game since he joined the team. Sure he has flaws. For starters, he needs to continue to improve his pocket awareness and he must step up his game during the post-season. But to be fair this has never been his offense. I expect that to change this year. Cam Cameron has kept Flacco on a short leash for too long and it’s time to finally open up the full playbook and let him fly.

It’s a point that many have suspected and it was confirmed when John Harbaugh said that Flacco will have more say in the game plan and an increased ability to audible play calls this season. Derrick Mason’s release could be addition by subtraction since he won’t be in Flacco’s ear begging for touches anymore.

I’d like to think that he can step up his game to the next level if fully given the chance. It appears any excuses to the contrary won’t be there this season. The Ravens will still have a solid defense and an improved run game to lean on if Flacco falters but if the Ravens want to go further than usual it will because he’s improved his play against elite teams when it counts.

4. The Steelers always seem to have the Ravens numbers in big games, including the playoffs a year ago. Do you think entering this game the Steelers are truly in the Ravens heads?

I think to a degree it has to bother those players that are back from last season. It only took a few plays to have this team go from hosting a post-season game to having them have to run the playoff table on the road again. The second half implosion last season has been a tough one for fans to shake. From their perspective this game is taking on a “Must-Win” feel. I think the players have more perspective than that and will treat it like any other Steelers game. It does give them a chance though to atone for their past failings of coming up short in crunch time against a division rival. A win for the Ravens in Week One would most definately mean more to them than their opponent to start the season.

5. Final score and why

The Steelers and Ravens will engage in yet another slugfest on a very solemn day in our Nation’s history. Due to the lockout I think teams that were able to retain most of their players will have a distinct advantage early in the season. The Steelers fit the bill very well. Even though I like the moves the Ravens have made they need time to play together, expecially the offense which has been re-tooled greatly. It’s always been the offense that’s held the Ravens back from greatness in the past and while I think they will improve over last season it will take time. I don’t see Baltimore able to hold serve at home and predict a Pittsburgh win 21-13.

Dress Your Way to Victory: Get Outfitted for the Steelers Season with Old Navy
Matt Loede’s 2011 NFL Predictions