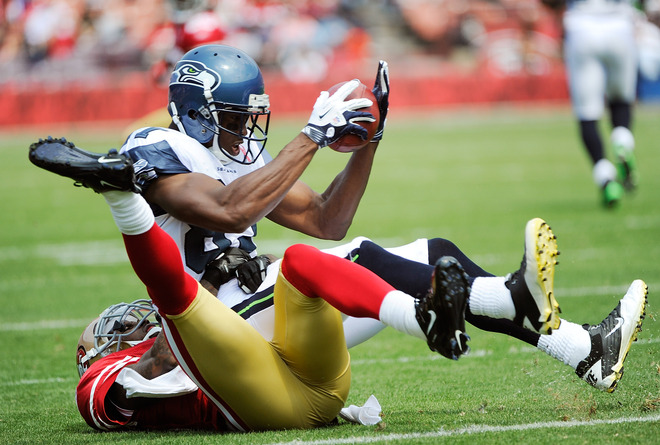 1. Talk about some of the positives for the Seahawks in their opening day loss to the 49ers

That young talented defensive has me giddy despite the worst offensive first half I have seen from this team in awhile. They looked anything but green, especially along the defensive line. Pete Carroll appears to be molding a Mike Williams 2.0 in castoff cornerback Brandon Browner, the tallest cornerback in the league hovering at 6”4. He has solidified his position as the starting cornerback opposite Marcus Trufant.

Both Seattle and Pittsburgh have very shaky offensive lines and very good defensive lines; this week-two matchup will definitely be determined in the trenches.

I’m sure there is plenty of competition for undrafted rookie free agents, but apparently around 20 teams were all fighting and clawing to get this guy badly and he graced all “top available undrafted free agent lists” I personally saw.

We can see why now, 4 catches for 83 yards including a 55 yard score that (very temporarily), appeared to shift the momentum of a previously 0-16 dreadful offensive game in Seattles favor with 4:00 left. Even when Sidney Rice gets healthy expect the raw dynamic Baldwin to continue to get offensive catches touches.

2. Pete Carroll singled out the play of safeties Kam Chancellor and Earl Thomas in Sunday’s loss. Talk about them and what type of season you think they will have.

Between these two, Thomas is one year removed from being a top 15-draft choice and having an impressive rookie season. He’s considered by many to be on the precipece of elite status. Chancellor doesn’t have the same pedigree, but was an enforcer last Sunday in his first NFL start notching 10 tackles and playing a huge roll in stuffing Frank Gore,; considered one of the best runners in the league.

Like I said, this young defense has me giddy. Barring injury, I expect Thomas to have an All-Pro season where he at least matches his rookie total of five interceptions.

I expect Chancellor to easily approach 100 tackles if they keep using him the same way they did against the 49ers. The Madden guys have already taken notice on Chancellor, bumping his previous 68 rating all the way up to a generous 75.

3. What matchup problems do you think the Seahawks will have with the Steelers Sunday?

There’s nothing about this matchup I have an issue with except that the Seahawks offensive line is going to get massacred by the Steelers front seven. Unfortunately that’s a pretty damn big part of any football game; Jackson may be getting another box of condoms this week. Fortunately, the Steelers are an equal mess along the front five and it could be Big Ben receiving some latex (that would seem more appropriate anyway?), instead. Whoever can capitalize on each others bad offensive line is going to win this game.

4. Seattle went with QB Tarvaris Jackson Sunday, he threw for 155 yards and two touchdowns in the loss. What type of game do you think he had, and do you think he’s the long term answer at QB?

His first half was everything terrible I had fearfully envisioned when they installed him as their starter. That random spike into the ground had my roommate and I dumbfounded. He had the laziest pocket presence I believe I have ever seen from a quarterback and held onto the ball way too long. The only positive thing about the universal negatives of his first half was that his interception was a hail mary at the end with no impact on the game.

The second half was completely bi-polar; it was like a completely different quarterback took the field. He actually had a sense of urgency in the pocket and was making some nice short throws and was actually leading the team to a 4th quarter comeback until someone named Ted Ginn pulled a Leon Washington.

It was both exactly what I feared and at the same time a flash of some actual solid quarterback play; it’s like he met everyones sarcastically low expectations of him while also surpassing them at the same time. This doesn’t mean I want him as my starting quarterback for the long term though, not by any stretch of imagination. One good half of football won’t win me over (especially with the terrible one that preceeded it) and I am really starting to become a believer they are purposefully in the Andrew Luck sweepstakes anyway. If they aren’t going to the Super Bowl, what is one season for the potential to have the most coveted quarterback prospect in recent memory for 15 of them? This point has been brought up to me multple times recently and if you have your eye on the future it does make some undeniable sense.

5. Final prediction for the game with a score

Everyone’s making a big deal about Bill Leavy reffing this game, Seahawks faithful should be looking at this as a good thing. Do you think Leavy is going to make any questionable calls against the Seahawks after Super Bowl XL?

I expect a defensive struggle with some messy offensive football and a lot of hits on both quarterbacks. Seattle is an historically awful morning team and this game starts at 10 AM in Pittsburgh.

Final Score: 23-13 Steelers over the Seahawks with a bunch of field goals.