Cowher, Bettis, Dawson All on the List for the Hall of Fame in 2012 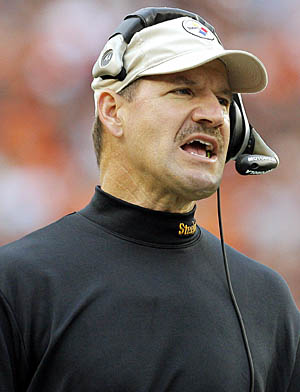 Bill Cowher Could be Hall of Fame Bound

There could be a rather large black and gold presence at the Hall of Fame in 2012, as a couple of former Steelers along with former coach Bill Cowher are among the 103 modern-day nominees to the Pro Football Hall of Fame that were announced Wednesday.

This is the first season Cowher is eligible for the Hall of Fame after waiting the required five years. Other Steelers on the list include two who were finalists last year, center Dermontti Dawson and running back Jerome Bettis.

From the 103 nominees, the Pro Football Hall of Fame selection committee will choose 25 candidates who will advance as semifinalist nominees. The list of 25 semifinalists will be announced in mid-November.

The list of 25 semifinalists will be further reduced by a mail ballot to 15 modern-era finalists and announced in early January.

The final list of nominees that will be considered for election will consist of the 15 modern-era finalists and the two senior nominees, former Steelers defensive back Jack Butler and former Detroit Lions guard Dick Stanfel, who were selected this last month by the Hall of Fame’s Senior Selection Committee.