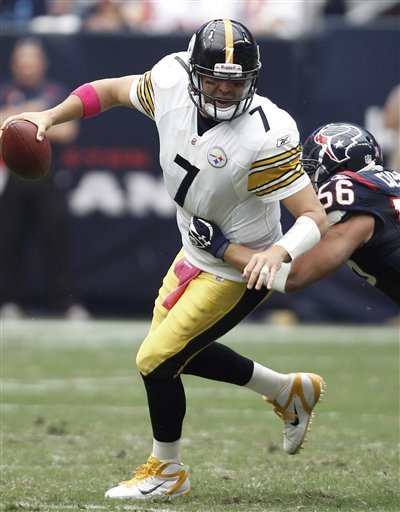 Ben Roethlisberger beat up all day by the Texans.

For one quarter Sunday it appeared as if the Steelers had it right. They were running the ball with attitude, protecting Ben Roethlisberger, and making plays.

But, just as fast as it came, it went, and with it the chances for a 3-1 record as the Steelers fell to 2-2 on the season with a frustrating 17-10 loss to the Houston Texans at Reliant Stadium.

The Steelers defense again had major issues against the run, as Houston running back Arian Foster gashed the Steelers for 155 yards on 30 carries with a score. He led a Texans offense that dominated the game in quarters 1, 2, and 4, the final quarter really being the one that mattered.

Foster went for a 42-yard TD run with 12:02 to play for the game-winner. It came on a play where a couple Steeler defenders, including Troy Polamalu, ran into each other, allowing Foster to race for the long TD.

It was the longest running TD allowed by the Steelers D since their home loss to Denver way back in 2006, when WR Javon Walker scored on a reverse.

The Steelers patch work offensive line was the difference, as they were not able to protect Ben Roethlisberger when they needed to, as the QB ran for his life all day.

On the day, Ben was sacked five times for negative 28 yards, and took quite a few shots, including one on the final drive that showed him get hit low. The Texans were hit with a 15-yard penalty, but it didn’t matter as a few plays later he was picked to end the final Steelers threat.

Roethlisberger ended the day 16-for-30 for 206 yards with the end of game pick. He ended up rushing two times for 11 yards, but had to escape trouble all day.

The Texans QB Matt Schaub was held in check for the most part, as Houston relied on the ground game all day. Schaub went 14-for-21 for 138 yards and a TD on the Texans opening drive.

Houston set the tempo for the game on the first drive, going on a drive that covered 19 plays for 95 yards and took 10:39 off the clock. Schaub hit Owen Daniels for the one-yard score to make it 7-0.

The Texans rushed and got to Roethlisberger quite a bit early, and it wasn’t till the Texans were up 10-0 that the Steelers finally got a drive together.

With the half ending, they lined up for a field goal to try to cut it to 10-3. Shaun Suisham’s kick was blocked, and the Texans took it back with zeros on the clock for a score that looked like it would make it 17-0.

The Steelers though caught a break, as Daniel Manning was called for a block in Susiham’s back, and the half ended 10-0.

The third quarter belonged to the Steelers, as they finally ran the ball with success, and put together great drive, going 74 yards in 13 plays. Antonio Brown made a couple big catches, and Rashard Mendenhall had some room to run, eventually going in from three yards out to make it a 10-7 game.

After a three and out, the Steelers put another drive together that ended with a field goal on the first play of the fourth quarter to tie it at 10.

Despite things looking up, the Texans took over from there, going back to Foster who eventually went in for the winning score with just over 12 minutes to play.

The Texans outgained the Steelers 318 to 296, and the Steelers ground game was held to 118 yards, though they did look better in the second half.

Now at 2-2, the Steelers will play four of their next five games at Heinz Field, starting next week with the 3-1 Tennessee Titans, who beat up the Browns in Cleveland Sunday.