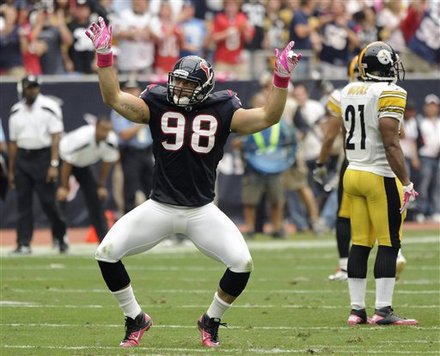 Connor Barwin with a sack.

Just to note how bad this line is right now, the Steelers have a 3rd and two, and Roethlisberger had to force his pass to Heath Miller, who was a yard short of the first down due to the fact he’s now simply gun shy after being smacked around so much early in the game.

Of course the Steelers still can’t stop anyone on third down. About the only game they seemed to be able to do it was against the downright awful Seahawks. They got a break, and not that you want to see anyone get hurt, but Andre Johnson would have had a huge gain on first down, but his leg gave out and he went down on his own holding his right knee.

The big play for the Steelers was the pass play from Ben to Wallace that covered 40 yards to the Texans 33. Then a dumb penalty on Markuice Pouncey set them back, and then because of it being first and goal at the 6, it was pushed back and the Steelers had to settle for a field goal try, which of course was blocked. But, on a good note, and it was about the only one, there was a block in the back on Daneil Manning, and the score was nullified.

Unless something big happens though, it won’t matter, this team is in a LOT of trouble.