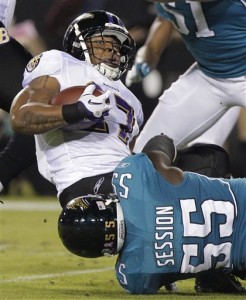 Remember last week when a lot of people were on the Steelers for only beating the Jaguars by four at 17-13? Well, it could have been signs of a turnaround for the Jaguars, who pulled off a great favor for the Steelers Monday night, beating the rival Baltimore Ravens 12-7 in Jacksonville.

The Jaguars defense stuffed the Ravens all night, holding Baltimore without a first down till the third quarter, and the Ravens only TD was scored with 2:02 remaining.

Ray Rice, who torched the Steelers on opening day, ran for just 28 yards with a fumble, and Joe Flacco was held to 137 yards passing the Ravens had just 10 first downs.

The most important matter – the loss means the Steelers move into first place for the time being. The Steelers are 5-2 after their third straight win on Sunday with a 32-20 win in Arizona. The Ravens, who have lost to two AFC South teams in the Titans and Jags, are 4-2.

Of course while it’s good to be in first for now, the two teams will meet in two weeks for bragging rights again for the division in Heinz Field.

Smith to Go for Surgery on His Neck; Career Likely Over
Belichick Talks Steelers Offense in Conference Call