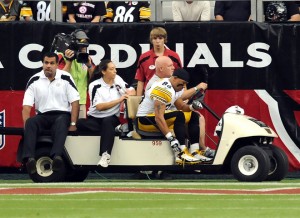 Steelers veteran wide receiver Hines Ward is “highly unlikely” to play Sunday at home against the Patriots, according to Albert Breer of NFL Network, who cites a league source.

Not a big loss, especially when you consider second-year wideouts Antonio Brown (7-102) and Emmanuel Sanders (5-46-1 TD) each were consistent targets for Big Ben last weekend in Arizona.

Ward is listed as “questionable” with an ankle injury on the team’s official injury report.

On the season, the former Bulldog has generated 26 receptions for 258 yards and two scores.

Last time: Here is the box score (’07 Week 4 at Arizona) of the last game missed by the four-time Pro Bowl Steeler staple at receiver.