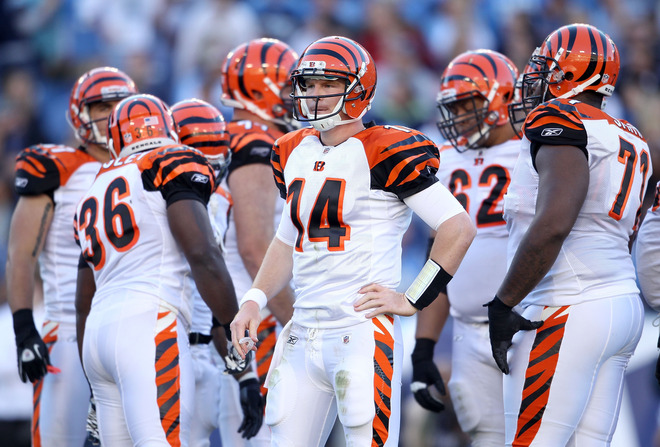 Andy Dalton Leads the Bengals vs the Steelers

Coming off a tough loss Sunday night against the Ravens, the Steelers head to Paul Brown Stadium Sunday to take on a Bengals team that is a surprising 6-2.

Led by rookie QB Andy Dalton, the Bengals have won six games, but five of the six wins have come against teams with losing or .500 records (Buffalo the only winning team they have beaten). So can the Steelers get back to winning Sunday? Here’s our preview and keys to find out.

1. Protect the Football – Points off turnovers has been key to the Bengals’ success this year, and they enter this game tied for seventh in the league with a plus-4 turnover differential. Cincinnati also ranks tied for second in the NFL with nine fumble recoveries and had scored a defensive touchdown in three consecutive games before last Sunday. The Steelers have to be smart with the ball, and Ben Roethlisberger can’t throw bad picks to allow the Bengals to have short fields.

2. Jump Out Early – With the Bengals’ ability to score late and wear teams down, the Steelers will need to keep Cincinnati off the board early. Last week versus the Ravens, Pittsburgh stopped Baltimore three times at the one-yard line to hold the club to a field goal. It was the first time in three games that the Steelers allowed points on an opening drive. They had a 27-7 lead last season and still had to sweat out the game in Cincy on a Monday night. If it’s close entering the fourth quarter, the Bengals will have the edge.

3. Scramble Dalton’s Brains – Dalton has been on a nice run, but he’ll need to be in top form versus the Steelers. The Steelers have held six of the nine quarterbacks it has faced this year to a passer rating lower than 87.0. It has also held six of those nine signal-callers under 200 yards passing. Dalton has never gotten a full dose of a Dick LeBeau defense, and the Steelers should be able to throw their blitz packages and book at him to get him off his game.

Prediction – It’s a huge game for the young Bengals, who will look to take a monster step forward as they host the ticked off Steelers. The Steelers are slowly but surely getting a little healthier, but they still won’t have LaMarr Woodley. The Bengals don’t have the playmakers to stand up to the Steelers hot offense that scored 14 quickly to take the lead that could have stood Sunday vs the Ravens. Steelers win in a close one in a must win for them. Pittsburgh 31 Cincinnati 24