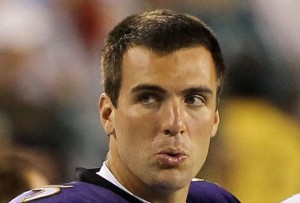 Ravens QB Joe Flacco – aka the Crybaby – is at it again.

Boo-Hoo Joey, another enduring statement from a QB that has no trips to the Super Bowl under his belt, and better yet has choked the most when it counted – the playoffs.

The crying about Tebow drew a great response from one of the guys that loves to beat on him – Steelers LB LaMarr Woodley. Relaying the news to his followers, Woodley tweeted: “Is it me or does some1 sound jealous? LOL!!”

Flacco and the Ravens are on Sunday night football, as they have been a couple of times this season, and still the whining QB went on to say “I just think we’re disrespected as an organization when it comes to the media,” crybaby said.

While it’s no doubt that Tebow is getting a ton of media attention, like it or not he’s one of the better stories in the NFL this season, and he’s led Denver to an 8-5 record after 13 games, this after they were 1-4 when he was sitting the bench.

Why Flacco won’t just keep his mouth shut and look to play better is beyond me. Then again, why does it surprise me at all when it comes from a team of guys that can whine with the best of them.