Roethlisberger Denies Taking any Painkilling Injection For His Ankle 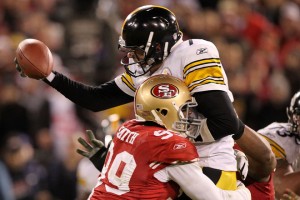 Ben Roethlisberger said he didn’t take any painkilling injections before playing through a high-ankle sprain in a 20-3 loss to the 49ers on Monday night according to Scott Brown of the Pittsburgh Tribune-Review.

“We heard that (ESPN analyst) Steve Young and those guys say that before pre-game, ‘Oh, he’ll go shoot it up.’ No we don’t do that,” Roethlisberger said. “They would never put me out there and endanger me or anybody on this team. There was no injection there was two Tylenols and two Advil.”

That Roethlisberger took anything stronger for the pain caused by he injury to hs left ankle was a source of contention in a quiet Steelers’ locker room. As he wrapped Roethlisberger’s foot before the veteran quarterback talked to reporters, Steelers head trainer John Norwig said angrily, “He played without a needle.”

Said Roethlisberger, “I just think it’s silly that they assume that’s what you’ve got to do. Obviously we could have done that and it would have helped a lot but that’s kind of crazy to take that chance because you can further injure yourself.”

Lights Go Out In the Stadium and On the Steelers in 20-3 Loss to Niners
Moore Out For Rams Game; No News on Roethlisberger’s Ankle