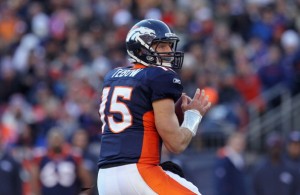 The Steelers 2011 season is over, but the NFL season continues this weekend, as there are still games to be played leading up to Super Bowl XLVI in Indy coming up on February 5th.

Here’s my picks for this weekend’s four games, two in the AFC and two in the NFC.

New Orleans at San Francisco – Everyone is on the Saints bandwagon, but a lot of people don’t seem to remember how good the Niners D is. With a solid front seven that will put pressure on Drew Brees, and a run game that will keep the Saints offense off the field, I like what the Niners bring to the table here. New Orleans is the sexy pick, but I think Alex Smith and the Niners do enough to pull off a huge win to advance to the NFC Title game the following week. 49ers 27 Saints 23

Denver at New England – Anyone else tired of Tim Tebow? Sure, he played the game of his life a week ago against the Steelers, but you can bet Bill Belichick will have his goons from New England ready to go against him this week. With temps below 10 degrees with the wind chill, and having already beaten the Broncos once, I have a hard time believing the Broncos are going to keep this close. Tom Brady and the Pats move on with relative ease at home as the clock strikes midnight for Tebow. Patriots 35 Broncos 14

Houston at Baltimore – Two very good defensive teams do battle in Baltimore, and the big question will be – what Joe Flacco shows up? The Ravens QB has had some solid games at home, and some that he’d probably like to forget. The game could come down to a battle of RB’s – Ray Rice for the Ravens and Arian Foster for the Texans. I like Rice and that Ravens defense to do enough to send rookie QB T.J. Yates and the Texans home for the offseason, setting up a Brady vs Ravens AFC Title game next Sunday. Baltimore 16 Houston 10

New York Giants at Green Bay – The finale to the weekend, a NFC showdown that a number of people seem to feel will play out like the 2007 NFC Title Game between the same two teams. Not gonna happen. Looks like a lot of people have already dismissed the Packers – you know, the Super Bowl Champs from a season ago that have gone 19-1 in their last 20 games. Love Green Bay here, as they will attack the Giants secondary, and I can see them getting to Eli Manning for a couple turnovers early to give them a lead they won’t lose. The Giants are playing well, but they are running into a hungry Packers team at home. Packers 31 Giants 13