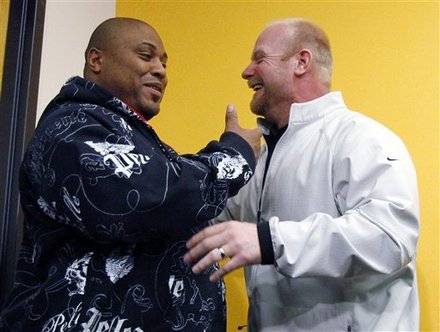 Hampton suffered the injury in the Steelers’ 29-23 overtime loss to the Denver Broncos. The 34-year-old nose tackle has undergone two previous surgeries to repair a torn ACL and Friday’s procedure will be the second on that knee.

During his 11-year career, all with the Steelers, the 6-foot-1, 325-pound Hampton has 347 tackles and nine quarterbacks, earning two Super Bowl rings and five trips to the Pro Bowl. Hampton is entering the final year of his most recent contract, which calls for a $4.89 million base salary and $1 million workout bonus.

Releasing Hampton would clear $5.89 million in salary cap space for the Steelers, who are over $20 million over the cap for 2012.

Mendenhall Has Surgery on ACL; Team to Sit Still on Contract Extension
Has Mendenhall Had His Last Carry with the Steelers?