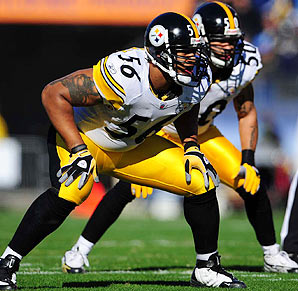 The Steelers got to work on the salary cap on Tuesday, as they cleared $6.56 million of salary cap space by renegotiating the contract of linebacker LaMarr Woodley.

Franchised by the Steelers prior to last year’s lockout, Woodley signed a five-year extension worth $52.5 million on August. Woodley received a $13 million signing bonus, $4 million option bonus and a $1.1 million base salary which resulted in a 2011 cap number of $7.7 million. In 2012, Woodley was due a $3.4 million base salary and had a $5.5 million roster bonus due on the 5th day of the 2012 league year for a cap number of $11.5 million.

On Monday, Woodley agreed to a restructure that lowered his base salary to $700,000. The remaining $2.7 million in base salary was combined with his $5.5 million roster bonus and converted into an $8.2 million signing bonus, which will be prorated over the remaining five seasons of Woodley’s contract.

Even with the Woodley restructure, the Steelers are still well over a 2012 salary cap that is not expected to increase much, if at all. Quarterback Ben Roethlisberger, safety Troy Polamalu and linebackers James Harrison and Lawrence Timmons each have cap numbers in excess of $9 million and are potential restructure candidates.