Roethlisberger Reworks His Deal to Get Steelers Even with Salary Cap 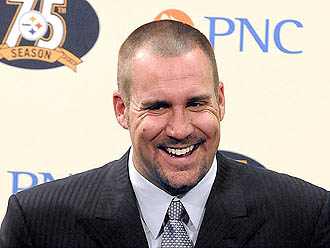 The Steelers did more wheeling and dealing today, and with the announcement that QB Ben Roethlisberger has re-done his deal, the team is at even with the NFL salary cap.

The two-time Super Bowl winning QB reworked his deal and cleared about $8 million in team cap room, according to his agent Ryan Tollner. He didn’t lose any money in the deal, but it sure does help the black and gold, who are trying to find ways to keep WR Mike Wallace.

Ben is the fifth Steelers player to restructure his deal. It was reported that the Steelers were $8 mil over the cap, which is about $120 mil per team. The reworked deal puts them right at the mark.

Roethlisberger had a salary of $11.6 million for 2012 before the restructuring. He is signed through the 2015 season on an eight-year deal he signed in 2008.

The four other vets to redo their deals to get the team help include linebackers LaMarr Woodley and Lawrence Timmons, cornerback Ike Taylor and tackle Willie Colon.

Colbert Says Steelers Will Do What it Takes to Keep WR Wallace
Video: Schefter on the Steelers’ Offseason Issues