OTA’s Open With Mike Wallace on the MIA List 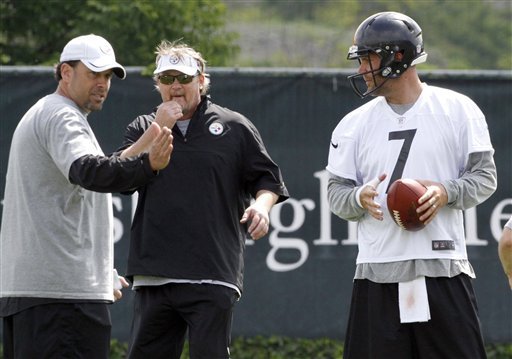 Mike Wallace has one of offensive coordinator Todd Haley’s playbooks. What the Steelers wide receiver doesn’t have is a new long-term contract.

Until the Pro Bowler gets one, don’t expect to see Wallace running drills alongside his teammates.

The Steelers began organized team activities on Tuesday and while attendance for the voluntary workouts was high – even All-Pro safety Troy Polamalu showed up – the focus remained very much on the speedy receiver who remains home in New Orleans.

The restricted free agent has yet to sign his one-year tender of around $2.7 million in hopes of trying to secure a lengthier deal.

Both sides remain positive one will get done. Neither appears to be in a hurry.

”It’ll be over, (just) a little bit of short-term misery,” coach Mike Tomlin said. ”It won’t be significant in the big scheme of things hopefully.”

Wallace missed the opportunity to get the first on-field look at Pittsburgh’s new-look offense under Haley, who took over in February, replacing longtime coordinator Bruce Arians.

The changes, judging by the first day at least, are sweeping.

From the terminology to the blocking schemes to the receiver routes, quarterback Ben Roethlisberger likened Haley’s system to learning a new language. Right now, the Steelers are at the equivalent of saying ”hello.” Anything else might be asking for too much.

The process has Roethlisberger feeling like a rookie again, so much so he asked receivers Antonio Brown and Emmanuel Sanders to be patient and stop looking for the ball.

”I tried to tell (them) don’t get frustrated because I know you’re used to getting a lot more balls, but this is how it was my rookie year,” Roethlisberger said. ”I know what one guy does and I go to him. If he’s not open, I start scrambling.”

Which actually, is the wrong choice. Haley was brought in to give the offense some balance and take some of the pressure off the franchise quarterback.

The Steelers passed the ball on 56 percent of their offensive plays last year – right about the NFL average – but the team would prefer Roethlisberger not drop back so much in order to avoid the kind of punishment that forced him to play most of the 2011 season with a series of injuries.

”I know that I’m supposed to get rid of the ball, stay in the pockets and not get hits,” Roethlisberger said. ”I guess I better learn where the protections are coming from so I don’t get hit.”

Wallace Not Expected for Start of Steelers OTAs This Week
Can Redmen Carry the Load for the Steelers Run Game?