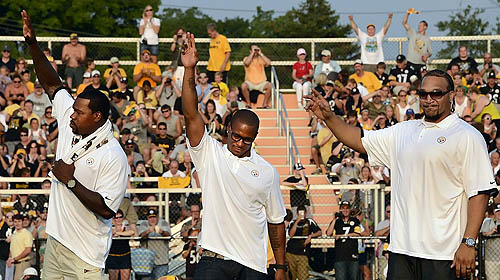 That seems to always be the case for past Steelers players, as Friday night no less than four former Steelers joined the team one last time to announce their retirement.

“This is home. Even when I left — it was OK to go and play for Miami and Arizona … but there’s nothing like home,” Porter told the Pittsburgh Post-Gazette. “Pittsburgh — once you come through here — it’s a special piece in your heart here, in Pittsburgh.That void wouldn’t have been filled if I didn’t come back and retire as a Steeler.”

“It’s finishing off where I started at,” Parker said. “The six years of my life were the best years I ever had. Meeting some of the greatest people and greatest athletes … being a part of the Pittsburgh Steelers is something no one can ever take away from me.”

It didn’t stop Parker from at one point in the 2008 season complaining that the team wasn’t running the ball enough. Nevertheless, the Steelers, as they always do, welcomed him back with open arms at the practice.

It’s always tough to say good-bye, but these players did it the right way. They did it the Steeler Way.