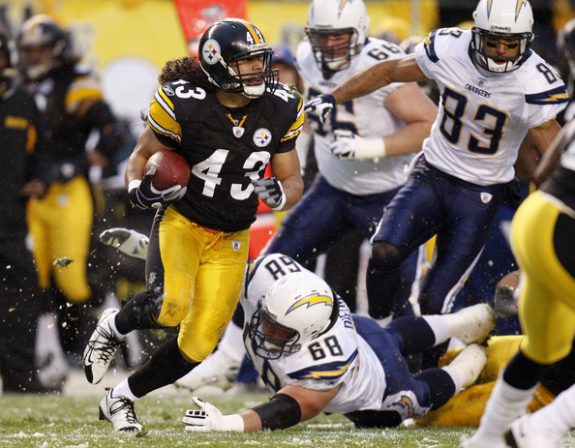 Sun 9/9 at Denver 8:20 pm – A lot of emotion over last seasons playoff loss, but Broncos like a whole new team with Peyton Manning. Not feeling good about this one, think Manning will have early success and the Steelers will have a slow start like last season. Denver 27 Steelers 13

Sun 9/16 vs NY Jets 4:25 pm – Another tough matchup, the home opener sees the Steelers challenge Rex Ryan and the Jets. Expect a hard hitting affair, and in the end the Steelers offense will get one more drive than the Jets, sending them home a winner to get to 1-1. Steelers 16 NY Jets 13

Sun 9/23 at Oakland 4:25 pm – The Steelers don’t seem to have a ton of success in Oakland, losing their in 2006 when the Raiders were not very good. Oakland has a new coach in Dennis Allen, and while I think they are about a .500 team, I think the Steelers rise up and play a good game out west, getting out of the black hole a winner. Steelers 21 Oakland 17

Sun 10/7 vs Philadelphia 1:00 pm – The Eagles come calling after the bye week, and you have to wonder if by then Mike Vick is going to healthy enough to play based on the amount of times he’ll get hit in the first month. The Steelers seem to play well vs NFC teams at home, and I think they will have a solid outing vs the Eagles, getting to 3-1 on the year. Steelers 27 Philadelphia 10

Thu 10/11 at Tennessee 8:20 pm – Heading to Nashville for a Thursday night game, I think the Steelers have a letdown here against a Titans team that looks like .500 on paper. Chris Johnson has never had huge games vs the Steelers, but I think here he has enough yards and combines with some decent enough play from their D to give the home team a win over the Black and Gold. Tennessee 16 Steelers 9

Sun 10/21 at Cincinnati 8:20 pm – Another prime time matchup, this time vs the Bengals, who the Steelers stepped up and beat twice in 2012. They beat up Andy Dalton and in the second game had a huge 2nd quarter to seal the win. They need to force Dalton into mistakes, and make sure A.J. Green doesn’t get loose. I see a close game, but I think the Steelers rebound to get to 4-2 following the Titans loss. Steelers 26 Cincinnati 21

Sun 10/28 vs Washington 1:00 pm – The Redskins come calling with new sensational QB RG3, and I think this week the Steelers defense gives him an education, hitting him hard and holding the Skins offense in check for most of the day. Look for Ben and his WR’s to have a big day, and the Steelers to get to 5-2 with a dominating effort again against a NFC team at home. Steelers 34 Washington 13

Sun 11/4 at NY Giants 4:25 pm – Another tough road game, this time against the Super Bowl champs as the Steelers go to Met Life to play the Giants. New York is battle tested, and they have played in plenty of big games, and will have a plan in mind to slow down the Steelers. The Giants pass game is very good, and I think Eli Manning will do enough to eek out a win against the Steelers. New York Giants 20 Steelers 10

Mon 11/12 vs Kansas City 8:30 pm – Cue up the Monday night theme, as the Steelers host Romeo Crennel and the Chiefs in a key game that will see them get to six wins against three losses. The Chiefs are better with Jammal Charles back and Matt Cassel, but still the Steelers crowd will help to fire up the D and get a win after Ben and the offense grinds out a couple scores early to build a lead. Steelers 27 KC Chiefs 14

Sun 11/18 vs Baltimore 8:20 pm – It doesn’t seem like there’s a time lately the AFC North has not come down to the two games vs the Ravens, and 2012 will follow that suit. The two teams will play twice in three weeks, with the first being a Sunday night game. The Steelers know what they have to do against Joe Flacco and his crew, and I think the Steelers get some revenge and win the first game in a nail bitter. Steelers 19 Baltimore 17

Sun 11/25 at Cleveland 1:00 pm – The Browns may one win 2-3 games in 2012, and this will not be one of them. The Browns have a new look with Brandon Weeden, and he will get introduced to the Steelers D in a big way. The Steelers usually play well in Cleveland, and they will again here with a solid win to set up the rematch with the Ravens. Steelers 28 Cleveland 10

Sun 12/2 at Baltimore 4:25 pm – I see both the Steelers and Ravens being at 7-8 wins here, and with a win the Steelers could really put a lock on the division. With that said, I think the teams are very close, and the Ravens will walk away with a win to even up the season series. The Steelers had major issues last time out in Baltimore, and I think Ray Rice will again have a big day in front of the home crowd, pushing the Steelers hopes of locking down the division on hold. Baltimore 23 Steelers 12

Sun 12/9 vs San Diego 1:00 pm – The Chargers could be the class of the AFC West this year, but stinging after the loss to the Ravens, the Steelers will get to 9-4 with a big win over Philip Rivers and the Bolts. Look for a big day for the run game, who always seem to dominate the Chargers. Steelers 30 San Diego 16

Sun 12/16 at Dallas 4:25 pm – A game that could decide the Steelers 2012 fate, they head to the place they lost Super Bowl XLV, playing Jerry Jones’ Cowboys and Tony Romo. I think Dallas, who was a game away from the NFC East title a season ago, is going to be very good in 2012, which is why I think this could be a huge game for the Steelers. I think Romo is better than most realize, and DeMarco Murray is going to give the Cowboys a better offense in 2012. Hate to say it, the Cowboys win a tight one at home. Dallas 24 Steelers 21

Sun 12/23 vs Cincinnati 1:00 pm – Following a tough loss to put the Steelers at 9-5, they come home for two AFC foes in the Bengals and Browns, and I think both games will go pretty much the same, with the Steelers taking care of business. I expect to see a whitewash over the Bengals, with the defense beating up Andy Dalton as they did a season ago enroute to a big win. Steelers 27 Cincinnati 14