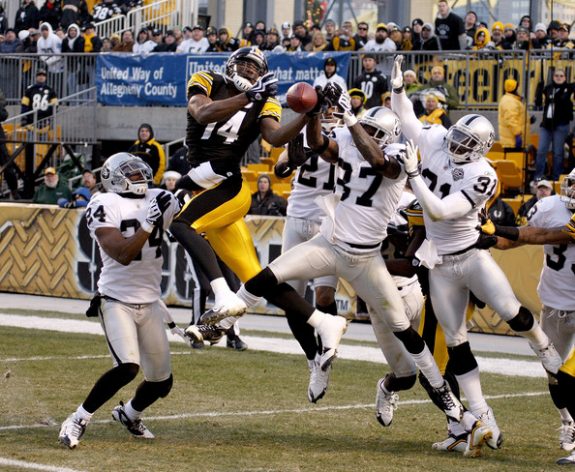 It’s not exactly John Madden’s Raiders against Chuck Noll’s Steelers Sunday when the 2012 versions meet in Oakland. The Steelers got in the win column for the first time in 2012 Sunday vs the Jets, while the Raiders have limped to an 0-2 start.

1. Smother the Raiders Ground Game – If the Raiders are going to pull the upset (they are four point home dogs), they are going to have to get a solid day from their running backs, which includes stud back Darren McFadden, who has gotten off to a woeful start. The Raiders are is gaining an NFL-worst 2.0 yards per carry, and McFadden had just 22 yards on 11 attempts in last Sunday’s 35-13 loss at Miami.

2. Pick Apart the Oakland DB’s – For the second straight week, the Steelers will have a shot to have a big day with their WR’s and TE’s, as the Raiders defensive backfield is banged up. Both starting cornerbacks, Shawntae Spencer (sprained right foot) Ron Bartell (broken shoulder blade) are out. Pat Lee struggled last week, and Steelers receivers should be able to pick on the Raiders all day.

3. No Cheap Points – The Steelers can allow the Raiders to hang around, just like they did in the 2006 fiasco in Oakland, by giving the ball away and allowing the Raiders to have short fields. Carson Palmer is a QB that knows the Steelers very well, going 4-8 against them in his career, but if you give him and his young band of pass catchers short fields to work with, it will give the Raiders the confidence they need to think they can hang.

Prediction – This game reminds of last seasons matchup with the Cardinals. The Steelers are the better team all the way around, but alas it’s a west coast trip, and those can be tricky. Just as the Cowboys about their trip to Seattle last week. All that said, the Raiders have shown me little in the first two weeks, and now they play a Steelers team that looked awfully good last week vs the Jets. Their hope is that the Steelers offense makes a lot of mistakes, and I just can’t see that happening. Oakland needs to rush the ball with success, and need to stop Ben Roethlisberger and those WR’s. Won’t happen. Pittsburgh 28 Oakland 10