Harrison Has Setback in Trying to Come Back from Knee Injury 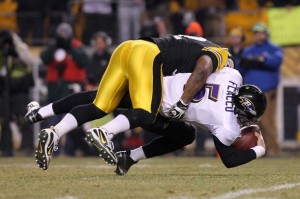 The news on LB James Harrison is not good. At least from reading from in-between the lines.

The Post-Gazette states that Harrison, who went full-go Tuesday in practice, suffered a setback on his knee, and now there’s doubt he’ll be back for the teams next game, October 7th vs the Eagles.

Harrison left the Steelers training facility Wednesday before practice due to issues with the knee. “It’s a little bit of a setback,” said agent Bill Parise, who spoke with Harrison after he went home. “Hopefully, it’s not something that will derail our plans.”

The Steelers already are having issues with the pass rush, as while LaMarr Woodley is doing his thing on one side, the other side has been a bust, with Chris Carter providing little in his first three starts.

Not good news to say the least for a defense that has struggled.

Video: OC Todd Haley on the Lack of a Run Game
Polamalu’s Calf Feels Better; Hopes to Play Next Week vs Eagles