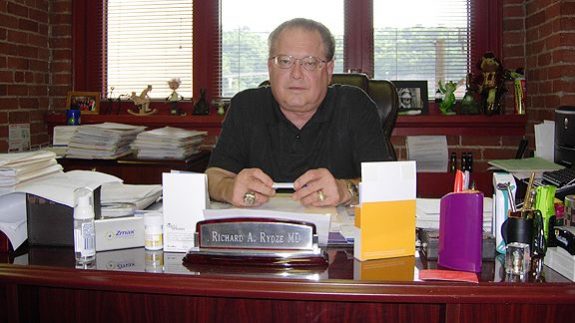 A former Steelers doctor who left the team after investigators questioned his bulk purchase of anabolic steroids has been indicted for illegally prescribing the muscle-building aids and other drugs.

Federal authorities don’t list the team or its players as having gotten the substances from Dr. Richard Rydze, who was charged in a 185-count indictment with conspiracy to illegally distribute steroids, human growth hormone and painkillers including oxycodone.

The 62-year-old physician also is charged with health care fraud. Authorities said he falsely diagnosed more than 90 patients with pituitary dwarfism so they could receive human growth hormones and drugs meant to counteract the side-effects of steroid use. The FBI contends the patients were normal-sized adults who didn’t need such substances.

Rydze and his attorney declined to comment after his initial appearance before a federal magistrate in Pittsburgh on Friday afternoon. The doctor will remain jailed until Monday, when U.S. Magistrate Judge Robert Mitchell must decide whether Rydze should stay behind bars until trial.

Assistant U.S. Attorney Carol Skutnik told Mitchell she will ask for continued detention because Rydze has continued to prescribe drugs “10 to 15 times” in recent weeks despite losing his federal license to do so in July.

Public defender Michael Novara told Mitchell he believes Rydze should be freed because the doctor is a “lifelong, law-abiding, well respected member of the community.”