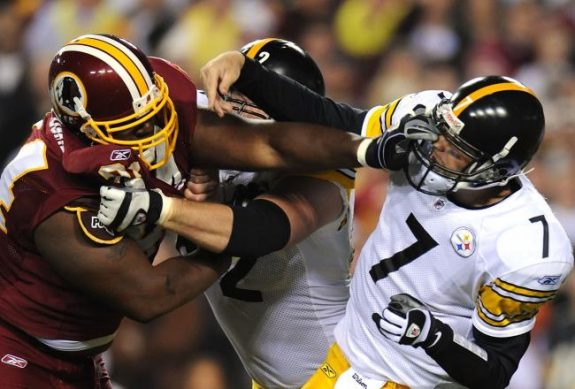 All the talk this week in the Steelers-Redskins matchup has to do with electric Skins rookie QB Robert Griffin III, and just how the Steelers are going to be able to stop him.

Today we look at the three keys to a win for the Steelers, as well as our pick for the outcome of Sunday’s huge affair at Heinz Field that could put the Steelers at 4-3 on the year.

1. Control the Tempo with a Run Game – Last week the Steelers dominated the line of scrimmage vs the Bengals, thanks in part to a solid run game led by power back Jonathan Dwyer. All he did was put up 122 yards, and when the Steelers wanted to run the clock out, it was he who had the ball in his hands, putting the Bengals to bed. If the Steelers want to keep RG3 and the Skins offense off the field, how about a repeat outing this week against a Skins defensive front that isn’t even as good as the one they played a week ago. It’s an attitude and a tempo setter, and one the Steelers should go back to.

2. LeBeau at the Controls – Everyone that follows Steelers football and knows the history of DC Dick LeBeau vs rookie QB’s knows that the Steelers don’t lose to first-time QB’s when they face them. What LeBeau does best vs rookies is throw looks, and a lot of them, at QB’s and try to knock them off their game and confuse the you know what out of them. Expect it to be the same formula this week with LeBeau not letting Griffin get into much of a rhythm, and throwing the book at him all day.

3. Home Field – The Steelers have won three games, two of which have been at home, and the home crowd always seems to give them a lift and some extra life when they need it. So far in 2012 the team just seems to play with more attitude and urgency at home, and vs the Jets and Eagles they played well enough to get wins. Against the Skins, lean on a rabid crowd, as well as the momentum of the fact it’s a home game to the advantage of the Steelers. It should pay off.

Prediction: Washington has been good, but the Steelers appear to be starting to get things in order with the win last week as a solid starting point to what they hope is a long winning streak. Look for their offense and run game to carry the Steelers, and while RG3 will make some plays on the Steelers D, the Steelers will walk away with a 7-point win to get to 4-3, and with a shot to then look ahead to what should be an easy Monday night game vs the Chiefs in week 9. Pittsburgh 31 Washington 24