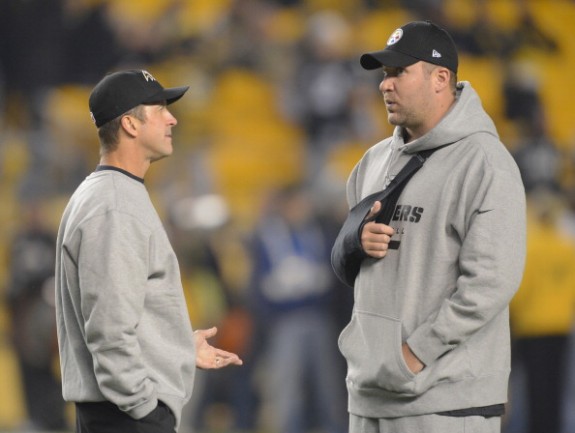 Ben Roethlisberger still has pain with many simple movements, seven days after he suffered shoulder and first rib injuries in the Monday-nighter against Kansas City, and anyone forecasting a week for him to return is guessing, this according to Peter King of SI.com.

According to Dr. Clark Fuller, the director of Thoracic Surgery at St. John’s Health Center in Santa Monica, Calif., Roethlisberger has to be careful about returning too soon because of damage it can do to nerves in the right shoulder and arm, major blood vessels in the area, and, as Roethlisberger admitted last week, the aorta around the heart.

“This is not about being a tough guy,” said Fuller, who has neither examined Roethlisberger nor seen his X-rays or scans. So he made it clear he was speaking generally about the dislocation of the first rib, which is connected to the breast bone on one side and the spine on the other.

A throwing motion, he said, would not allow the rib to heal, and he would not recommend it any time soon. “Playing football with a dislocated first rib would put you at severe risk. There are many things to be concerned about, including destroying the nerves in the arm.”

Fuller said he thought Roethlisberger would miss a minimum of four weeks.

Video: Tomlin on the Three-Point Loss to Baltimore That Drops the Steelers to 6-4
Leftwich Has Broken Ribs; Batch Likely to Step in Sunday in Cleveland at QB