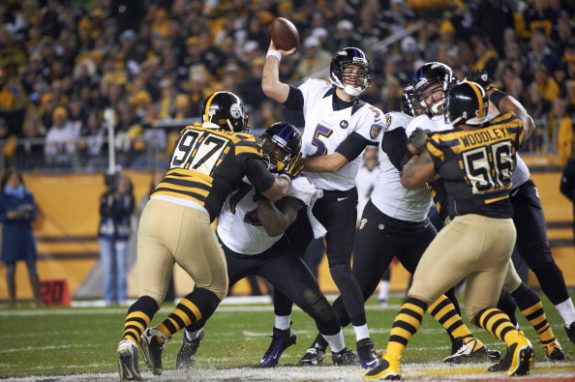 Ugh. The Steelers are losers of two in a row, and now all that awaits is a trip to the hornets nest – Baltimore, without QB Ben Roethlisberger. The team could get a couple big players back in Antonio Brown and Troy Polamalu, but is it enough to best the current top team in the AFC North?

Here’s our three keys along with our pick for the matchup with the Ravens in B-More.

1. Get Defensive – Let’s face it, the teams offense isn’t very good right now, which leaves their defense to pick up the slack. They did it a week ago first series of the game with a pick six of the Browns, and getting one this week vs the Ravens sure wouldn’t hurt. Troy Polamalu’s presence can’t be understated, as he’s a huge lift to what Dick LeBeau can run vs Joe Flacco. This team needs a 2-3 turnover day from the Ravens, and short fields to try and score a quick 10-13 points.

2. Get AB Into It – Antonio Brown has been out the past few games with an injury, and other than the Giants game in which Emmanuel Sanders had a good couple punt returns, the team really hasn’t had a spark on special teams. The return of Brown may change that, as he’s been the teams best returner the past couple seasons, and we will see if the Steelers want to have him right back in the return game, or just as a wide out. Brown is a key to the offense, they need to get him the ball.

3. Have an Attitude – As usual in a game vs the Ravens, things will be physical, and while the Steelers may be hurting, they are not dead, and have to play this game with some nastiness. I won’t be too upset if I see a few Steelers pushing and shoving, as long as it doesn’t cost em 15 at key points in the game. The Ravens want to make this a “AFC North Clinch Party,” and the Steelers have to fight for 60 minutes, maybe more, to make sure that doesn’t happen.

Prediction – Sigh. This offense did nothing to convince me last week they would be able to score more than 7-10 points, and knowing how the Ravens seem to turn it up a notch at home, I don’t see the Steelers being able to score enough here. Baltimore will feed a steady diet of Ray Rice, and Flacco will use his usual pass catchers of Torry Smith and Anquan Boldin to go downfield, and I think the Ravens offense will score their usual 3-7 better to win the game and send the Steelers into “wild card” mode. Baltimore 23 Pittsburgh 13