Colon Out After Surgery; Woodley Could be Back Sunday in Dallas 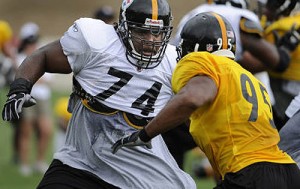 There was some good, some bad on Tuesday as head coach Mike Tomlin talked about the latest injuries for his Pittsburgh Steelers.

The biggest news of the day was the team declaring that guard Willie Colon is out for the time being, as Monday he had surgery on his knee, this after having problems with it over the last three weeks.

Colon is for sure a no-go on Sunday in Dallas, and most are betting he’ll wind up on IR in the next week or two.

“He will be out for several weeks,” Tomlin stated. “There is no real update on him other than that. We need to let a day or two go by before we look at the totality of his possible return or not. Just know he had surgery yesterday on his left knee, the one he has been dealing with.”

Also out this Sunday will be tackle Mike Adams and cornerback Ike Taylor.

Another player to watch from an injury front is CB Cortez Allen. Tomlin said that Allen suffered a hip flexor against the Chargers, and will be limited in practice this week.

For the good news of the week – LB LaMarr Woodley should return to practice this week, and it all goes well he will play.