Will Roethlisberger’s “New” Knee Be A Key To The Steelers Season? 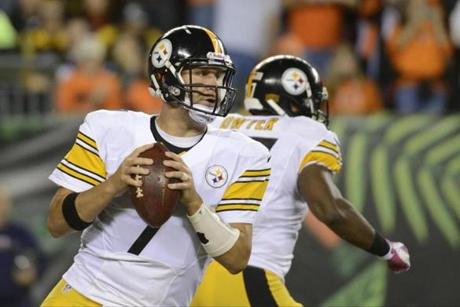 QB Ben Roethlisberger has declared himself pain free in his knee and ready to go for the 2013 campaign.

“It feels great, it feels better than ever, like it’s a brand new knee, and I feel younger than ever, I feel good,” Roethlisberger said this week from London, per 7M Sports.

The Steelers franchise QB had an arthroscopic procedure to clean up meniscus damage on June 5th.

Having mobility and the ability to get out of the pocket and make plays has always been a huge key to Ben’s game and the success of the Steelers, so the quote from above for sure is music to the ears of Steelers fans.

Right now if things old true, this is the outlook for the Steelers O-line entering training camp.

Getting DeCastro back is great, but let’s be realistic, he didn’t play enough in 2012 to get a full grasp if he’s going to be as good as everyone had him being coming out of college.

The two tackles are two players that need to step up in Gilbert and Adams, and they need to play well to make sure Ben doesn’t have another key injury like a season ago to his ribs.

No one is ever going to change the way that Roethlisberger plays, so the key other than having an offensive line that needs to play better than ever, is the mobility factor that a ‘new knee’ as he calls it, will bring to the table.

Last season Ben ran for 92 yards on 26 carries, but there’s no denying that the way he can create and a healthy knee is going to pay huge dividends for the Steelers in 2013.

Will Roethlisberger Make Good And Win More Rings Than Bradshaw?
Is There Cause For Concern On The Character Of Steelers C Maurkice Pouncey?