Who Makes Up For The Catches The Steelers Lost When Wallace Left? 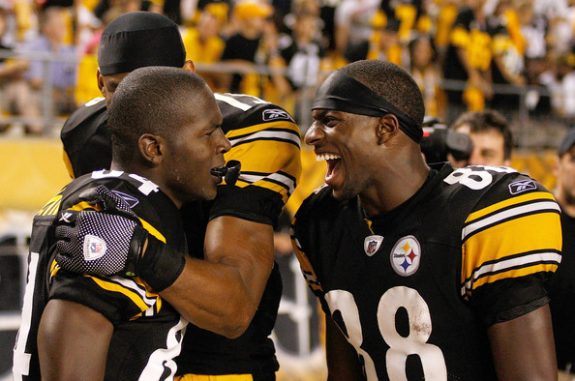 The Steelers lost their biggest big-play WR this offseason in Mike Wallace, which was totally expected, but at the same time, admit it or not, a blow to the teams offense.

Say all you want about the attitude or dropped passes, but Wallace’s numbers don’t lie – when he was making plays, he was dangerous to the opposing defenses.

In four seasons Wallace averaged 17.2 yards per catch, and scored 32 touchdowns, including 8 in each of the last two seasons.

Wallace in 2012 had 64 grabs for 836 yards, and if the Steelers are going to be a force in the AFC North and the league this year, they have to get those catches and yards back somewhere.

Today, we take a look at the options on the team and where we think Wallace’s snags and yards will end up.

1. Antonio Brown – The obvious choice given he got the contract extension that Wallace turned down, he’ll be looked at as the guy that needs to do the most to get this offense on track in the passing game. Last season had 66 catches for 787 yards and five TD’s, and as the biggest name of the wide out core, he’s got to put up even bigger numbers with Wallace gone. The team expects huge things in year four – let’s see if he delivers.

2. Heath Miller – First and foremost let’s assume that Heath is going to come back to the team at or very close to 100 percent. Things seem to be progressing in his recovery, and if they remain that way, he will once again be counted on to have a monster part of this offense. Miller took a big step at being one of, if not the best TE in the AFC last season with 71 catches for 816 yards and a career-high eight scores. Miller needs to be as good in 2013 as 12, but that may be tough with the injury. Expect a slight downturn in catches and yards as Ben Roethlisberger tries to get more players involved in the pass game.

3. Emmanuel Sanders – May benefit the most from the Wallace departure, as he is in a contract year, and if he wants the type of money or even close that Brown got, he’s got to step up and play like a full-time starter from day one of training camp. Sanders averaged just 39 yards a game last year, pulling in just one score. In his 3 seasons with the Steelers has 94 catches, but only five scores. He needs to find a way to keep himself healthy and on the field, and also needs to get better at making Ben notice him more around the goal line. Let’s see if the Steelers knew what they were doing when they matched the offer sheet from the Pats.

4. Markus Wheaton – He’s the wild card of the bunch, and based on his numbers last season at Oregon State (91 grabs for 1,244 yards and 11 touchdown in 2012), helooks to be a good one. Problem is, it’s going to take some time for him to get adjusted to the pro game, and if you look in the past, it’s rare that a Steelers rookie WR comes right in and makes a huge impact. Still, Wheaton is expected to turn into a big name threat for the Steelers, and if he can get into the pro game quickly, he can help this team this year make up for Wallace.

Summary: At the end of the day, the job of picking up the slack for Wallace has to first and foremost fall on the two WR’s – Brown and Sanders. If Sanders wants to be elite and pickup a huge offseason deal, he’s got a shot in front of him to do it. For Brown, he’s already got the money, and now he needs to numbers to show why the team paid him that much. Miller will contribute, but you have to worry about his injuries and if he can bounce back quickly.