Will Emmanuel Sanders Finally Have A Breakout Season In 2013? 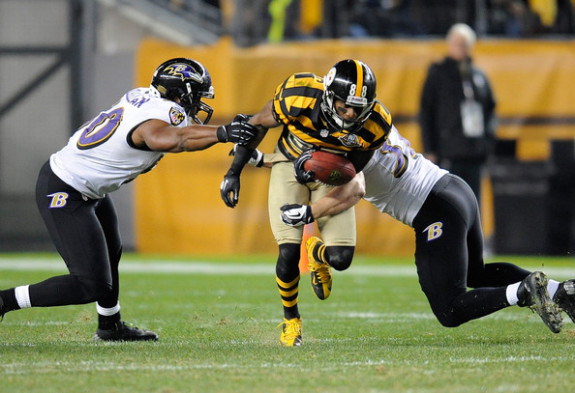 2013 will mark the fourth season for Steelers WR Emmanuel Sanders, and there’s no doubt that the expectations are higher for him than ever.

The Steelers this offseason took somewhat of a chance with him as they matched the Patriots RFA offer to him, which was $2.5 million for one season.

Pittsburgh could have let him go to New England and collected a third-round pick, but instead felt they needed an experienced WR to help out their core, and in the end they hope the decision was right.

Last season was the best for Sanders, finally overcoming the injury bug and putting together a year that saw him snag 44 passes for 626 yards with one touchdown.

The 5’11 wide out came out of college with the label of being ‘undersized’ and in 2011 missed five games due to injury. It was good to see him comeback and play a full season in 2012, but this year, he must step up and be the best he’s ever been.

Sanders has been mostly a ‘possession’ receiver in his first three seasons, putting up catch averages of 13.4, 13.1 and 14.2 yards.

Not bad, but again, this is a team that needs to be able to stretch the field, and Sanders has to be able to come up with a few big plays now and then.

The longest pass play in his career was just 37 yards, coming in the 13-10 Sunday night home loss to the Ravens in November.

In watching Sanders through parts of last season, he was an afterthought in a Steelers passing game that featured Heath Miller (71 grabs but may not be totally ready for the season), Antonio Brown (who was drafted in the same season as Sanders) with 66 catches, Mike Wallace (now in Miami) with 64 grabs.

Sanders will be counted on more than ever in 2013, the question is – will he respond.

It’s a contract year, and while there has been rumblings that the Steelers are interested in having Sanders with the organization long term, this season will dictate if that happens or not.

With Wallace gone and Miller trying to comeback from injury, Sanders is – for now – penciled in as the number two wide out opposite Brown.

If he wants to keep that spot, and keep it all season, he’s going to have to earn it.

Right now the numbers don’t lie – Sanders has work to do. We will see if he gets there in 2013.

Happy Birthday Antonio Brown! Top 5 Moments Of His Career
Poll: What Position On The 2013 Steelers Concerns You The Most?