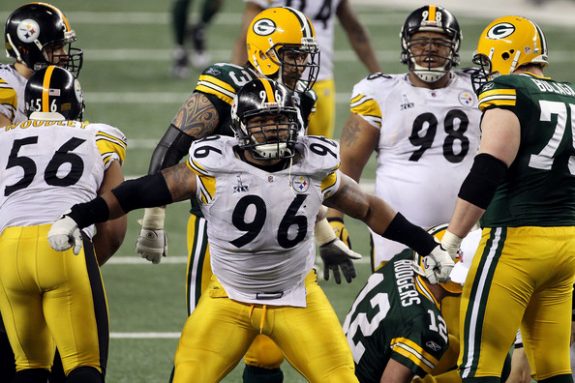 The Steelers are coming off a .500 season, and for Steeler Nation – that’s a letdown. While the defense has some questions, as does the running game, there’s plenty of excitement for the upcoming season.

For the Steelers to be successful, some things have to fall in place, and today we take a look at five things that have to go right for the team to go from .500 to having a good to great 2013.

1. Injuries – The Steelers last season lost two of their best players late, and it really hurt them in their push for the postseason. Once Ben Roethlisberger went down on a Monday night vs the Chiefs, and then their best CB Ike Taylor went down as well, the season never seemed to get back on track. Every team has injuries, but at the same time, the club needs to avoid the big injuries that have hurt them the last few seasons.

2. Haley’s Second Season Improvement – I didn’t think Todd Haley was the reason the Steelers missed the postseason last year, but at the same time, the Steelers OC made mistakes, and needs to get better and should with a year under his belt. Haley has already said that he wants to be more aggressive in the run game to try and protect Ben from the beatings he’s gotten, and that leads us to key number three.

3. Find a Run Game – The run game will be an open competition for the Steelers in 2013 training camp, and it will be fun to see if Issac Redmen, Jonathan Dwyer, and rookie Le’Veon Bell can make this run game into a force once again. There was moment in 2012 when the run game got on track (the first Bengals game comes to mind), but overall when this team needed a yard or two, it simply wasn’t there. The O-line is to blame as well, but these three will have the focus of if the run game will be good or not in 2013.

4. Finish on Defense – The Steelers needed seven weeks to win their first road game, and that’s in part due to the fact they lost a very winnable game in Oakland, and then lost an awful game they had in the bag in Tennessee. This team had leads in both those games, yet vs Carson Palmer and Matt Hasselbeck, two QB’s past their prime, the defense gave up leads first, and then field goals to lose those games. Win those two games, your 10-6, and in the post season. Let’s hope the lesson is learned.

5. Youth Needs To Step Up – There’s a number of high draft picks on this team that have been waiting around, watching as others in front of them, and much older, have made plays. Time for that to stop. James Harrison is gone, leaving an open spot for rookie Jarvis Jones at the LB spot. Casey Hampton is gone, leaving a spot for Steve McLendon at nose tackle. Just two examples of guys that will be given every shot in the hot sun in Latrobe to make plays. There’s others – from Ziggy Hood to Cameron Heyward that will get shots, and those players have to step up and do the job – or this team will again underachieve.