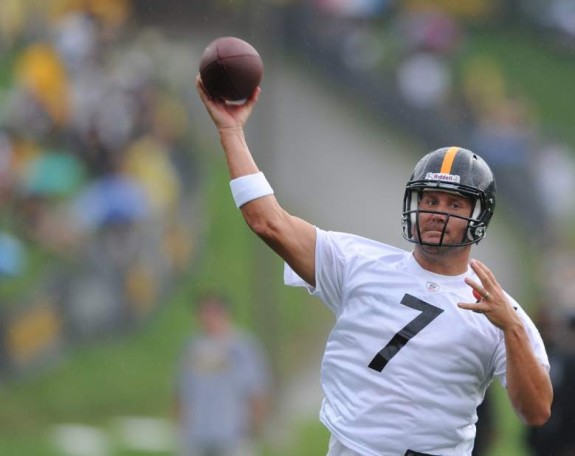 It was an ongoing topic throughout 2012, and all the sudden as camp kicks off in Latrobe, it appears it’s reared its ugly head again.

Ben Roethlisberger and Todd Haley don’t agree on every play the Steelers call.

Can we move on already?

The Tribune Review wrote on the topic on Saturday, with the headline being “Roethlisberger admits ‘frustration’ with Haley’s system last season.”

I’m not sure why this is an even a bother at this point, as from a distance Ben was on tap for his best season until a porous offensive line let him get beat up vs the Chiefs on a Monday night in November.

Roethlisberger seems to thrive at times when he talks, and while Steeler Nation would love for him to just keep quiet and do what he does best, and that’s make plays, at times it seems Ben lets his mouth do too much of the talking.

Saturday, he talked about the ‘frustration’ between he and Haley a season ago.

“He brought it in and (said) ‘Here’s my stuff, here’s what we’re going to do.’ So it was hard for us to say, ‘Hey, we were pretty doggone good last year, what were we 12-4?’” Roethlisberger said.

“We would say, ‘Oh, we know this play, it’s the same thing we had, but it’s called completely different.’ So why not call it the same thing? So there was a lot of frustration with that.”

Haley is a hot head, and Ben is a hot head, so let’s face it, at times the two are not going to sit around a campfire and sing songs, but to make it out like they can’t do enough to win?

If Roethlisberger doesn’t throw two key picks in late losses to the Cowboys and Bengals, he’s probably playing into at least the divisional round of the postseason.

At that point, stating that having frustration with anything Haley called or did in 2012 falls on deaf ears due to the overall success of the team.

Let Haley get back to getting the Steelers some type of run game, and let the O-line hopefully start to finally turn it around and play better.

If the Steelers win in 2013, Haley and Roethlisberger can become pals and let this all go away.

If they don’t – seems like Ben is going to keep lighting fires until he starts to get calls to go his way.

It’s a power struggle this team really doesn’t need now – or in the future.