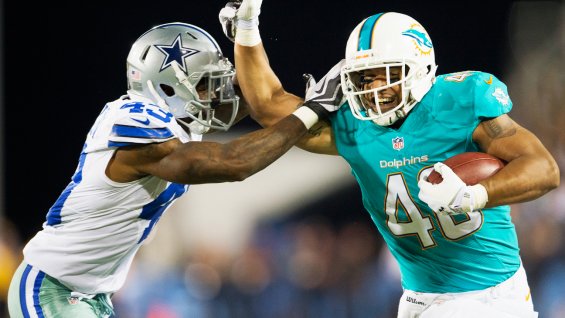 As the NFL season gets closer, we will start to talk with some writers from teams around the league about their clubs and their outlook for 2013.

Today we chat with Cody Strahm, who writes for DolphinsGab. The Fins are coming off a 7-9 season with a first-year coach and a rookie QB.

In year two, they have added a lot, and to interest of Steelers fans is WR Mike Wallace, who left the Steel City for the glitz of South Beach.

Here’s five questions about the Dolphins and their outlook for the 2013 season.

1. The Fins looked a bit sloppy in the loss to Dallas in the HOF game – any concern from that?

Not really. It was the first of five preseason games and the starters that did play, didn’t play very long. The coaching staff has made protecting the football a priority this season, so turning the ball over twice in the second half was a bit frustrating. But both giveaways were rather fluky plays. The first was a botched handoff starting running back Lamar Miller couldn’t secure. I highly doubt we’ll ever see him do that again. The second was a pass that bounced off of receiver Chad Bumphis’ hands and to a Cowboy defender. If they continue to turn the ball over throughout the preseason, Dolphins fans will have good reason to be concerned. For now, I’m chalking up Sunday night’s sloppy play to first-game jitters.

2. What type of season do you expect from QB Ryan Tannehill in his second year with Dolphins?

The Dolphins will only go as far as Ryan Tannehill takes them this season. There’s just no denying that his development could make or break Miami’s season. He certainly has the talent to come through, with the arm to make every NFL throw and the mobility to evade the rush or move the chains with his feet. But can he put all of his talent together and become a consistent quarterback? Will he be a vocal leader on the field in the locker room this season? How will he respond in big games and moments? Those are a few of the questions Tannehill must answer this season. And the additions of Mike Wallace, Dustin Keller and Brandon Gibson should surely help him improve. But I, for one, don’t expect him to immediately emerge as an elite passer with better weapons. I think he still has some developing to do. If Tannehill isn’t an above average quarterback by year’s end, however, more specifically a top-15 one, it would be a disappointment in my eyes.

3. What type of offense do you expect to see the Dolphins run in 2013 – uptempo or a more traditional two back offense?

Head Coach Joe Philbin installed a no-huddle, West Coast attack last year, which the Dolphins ran plenty of during Tannehill’s rookie campaign. And with the additions of Mike Wallace and Brandon Gibson at receiver to accompany Brian Hartline, the Dolphins will likely employ a heavy dose of three-wide, one-back formations. If the Dolphins’ offensive line continues to have issues in pass pro, however, offensive coordinator Mike Sherman could scale back the tempo some in order to feature more of a run-first, play-action passing scheme. That’s just a potential backup plan, though. Ideally, this is going to be an uptempo attack.

4. The defense is something that I know the team wanted to improve this offseason – what will they be like in 2013?

The Dolphins’ defense was a stingy group in the red zone last year, surrendering the 7th fewest points in the entire NFL. But they had a difficult time getting off the field at times, finishing 21st in total defense and 27th against the pass. I expect them to improve in both categories this season with better coverage and a more consistent pass rush. Free-agent acquisition Brent Grimes gives the secondary a ball hawk and someone who can contain the opposition’s go-to receiver. And the team’s second and third-round choices in April–Jamar Taylor and Will Davis–should help provide the cornerback position with depth. But the best way to slow down the pass is to consistently pressure the quarterback. Oliver Vernon, a third-round pick in 2012, is developing and first-round selection Dion Jordan looks every bit ready to have an impact as a rookie. All-Pro defensive end Cameron Wake likely won’t have to carry the load by himself in the pass rush department anymore. At linebacker, free-agent additions Dannell Ellerbe and Philip Wheeler will also help the defense become a faster, more attacking unit in 2013. Put it all together and the Dolphins could have themselves a top five defense.

5. Former Steeler Mike Wallace is already making headlines due to injury – any concern with him so far?

There isn’t much concern with Wallace’s minor groin injury. If Sunday night was a regular-season game, I suspect he would have played. There has been some concern about how his chemistry with Tannehill is progressing, though. The two haven’t connected on many deep balls so far in camp. To me, Wallace is simply too talented not to improve the Dolphins’ offense. He finally gives them a legitimate deep threat who can stretch the field and keep safeties honest. And that will only create more opportunities for Lamar Miller and Miami’s stable of backs, as well as the team’s short to intermediate pass catchers.

6. Last but not least – what do you think the Fins record will be in 2013, and will they make the postseason?

I’ve gone on record saying I expect a 9-7 season from the Dolphins in 2013. The defense should be one of the league’s best and Tannehill will likely improve enough to give the Dolphins a chance in most games. But the schedule is grueling on paper, especially during the first five weeks of the season. The Dolphins open with three road games in the first four weeks, 2012 playoff teams–including the Super Bowl champion Ravens–in three of the first five and one of the league’s best quarterbacks in Drew Brees on Monday Night Football in New Orleans Week 4. If the Dolphins can survive that gauntlet and enter the bye week at 3-2 or better, they’ll have a legitimate shot of competing for a playoff spot. I still expect the Patriots to take the AFC East with 10 or 11 wins, but the Dolphins could sneak in as a wildcard team– at 9-7.