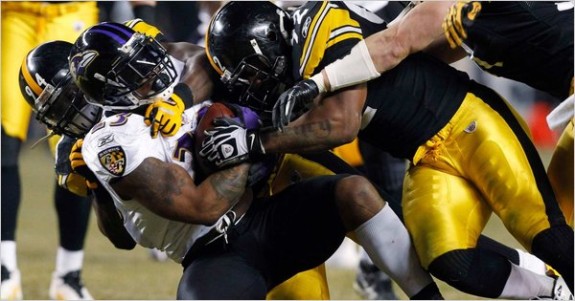 While the offense looks to be pushing the run game more in 2013, the Steelers defense is also adopting new looks, thanks to a new wrinkle by Hall of Famer Dick LeBeau.

LeBeau has been putting in place a different look in the Steelers 3-4 defense that is going to have the teams defensive ends rushing the passer on the edge more.

It’s a new look that will put more pressure on players like Ziggy Hood and Brett Keisel to get to the QB or the ball carrier.

It’s also a look that means the Steelers might finally be admitting they are not so sure they have what it takes to get it done at the outside linebacker spot.

Keisel sounds like he’s buying into the program of having the ends rush more.

“We definitely need to get more pressure up front,” Keisel said Tuesday, in the Pittsburgh Post-Gazette. “There’s been an emphasis more on (ends) getting on the edge rather than just pushing the pocket, getting on the edge and trying to make something happen.”

The team has been spending high picks on players like Ziggy Hood and Cam Heyward, which is maybe why the team has finally decided to go the route of having the ends rush more.

“We’ve kind of changed our techniques (from) years past until now,” said Keisel.

“In years past, when we had James (Harrison) and LaMarr (Woodley), it was mostly just push the pocket, try to collapse the pocket, make the quarterback flush and those guys would be there to clean him up. That’s what we were taught.”

This could be just what the Steelers D needs, as last season it seemed like quarterbacks have had just too much time to throw late in games, with players like Carson Palmer and Matt Hasselbeck having the ability to march downfield for wins.

Hood, Keisel and others will have their chances to make an impact with this defense – it could be just the thing the Steelers D needs to get back to closing out games in 2013.