TE Heath Miller On When He May Be Back: “I Have No Clue” 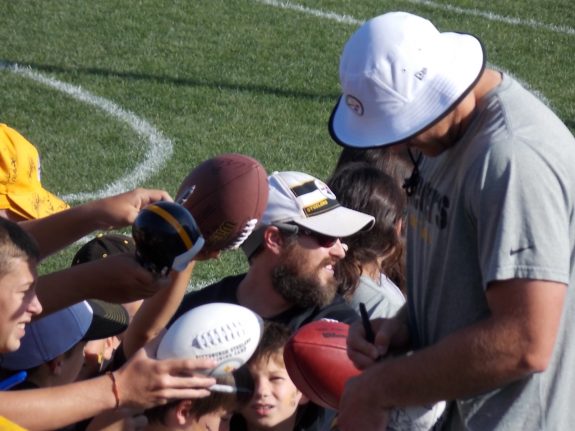 There’s been so much back and forth on when tight end Heath Miller may be back and ready to go for the Steelers, all the rumors are starting to get a little much.

Friday Miller spoke with Mike Prisuta of 102.5 WDVE, and said as of now he really does not know as to when he will be back on the field catching passes from Ben Roethlisberger.

“I have no clue,” Miller said to Prisuta. “This is the first time I have been through something like this.

“I won’t know till I go through it, for me to predict would be crazy I guess, I have nothing to go by.”

Miller said that he has been trying to stay fresh while he sits back and watches with taking reps mentally off the field, but knows it’s not the same as being on the gridiron.

There was a report that Miller was going to miss the first month, but Friday he declined to say that, and when he was asked if he would be back for the Titans, all he could say is he hopes so.

“I would love to, this is what we do,” Miller said. “We play football, so you kind of feel insignificant at times when you just sit around watching, but you just try to keep the proper perspective and approach.”

Miller has been watching a Steelers offense get off to a very slow start in the first two preseason games, losing to the Giants and Redskins.

The Steelers 2012 MVP said that he thinks it’s early to hit the panic button on the offense just yet.

“They are working hard, obviously we have some things to iron out, but I am sure you could go back to any preseason and say that,” Miller said.

“I think we all understand we need to get better, this is a really big week for us, we are going to play a really good defense in Kansas City, it’s going to be a good test and I am excited to see how we do,” Miller said.

For now, all Miller can do is be the best teammate he can by sitting back, keeping up with the mental reps, and helping his teammates anyway he can.

“I’m progressing, I would like it to be faster than it is,” Miller said. “It is what it is, and we’ll approach each day and try to make it a good one.”