Both Pouncey And Foote Done For The 2013 Season 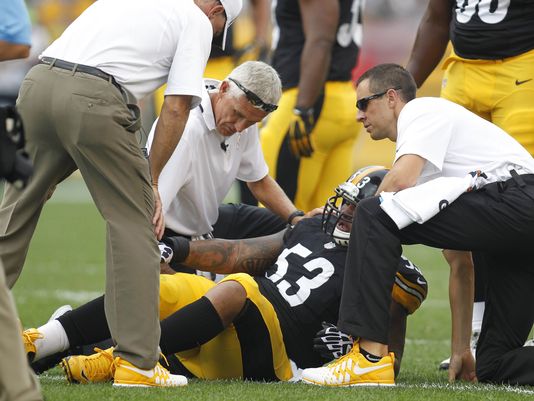 As expected the season is over for two starting Steelers, as Pro Bowl center Maurkice Pouncey and starting ILB Larry Foote are both officially done for the 2013 season.

“Nobody cares about our problems,” Mike Tomlin said. “They’re glad we’ve got them. We need to understand that. We need to stick together and persevere.”

Pouncey will have to have surgery, which will repair both his right ACL and MCL. He was hurt on the first Steelers drive after they got a gift safety from the Titans on the opening kickoff.

Foote ruptured his biceps in the second half, and Tomlin said he will have to have a surgery, which could end his career, as he was a question mark to come back in 2014.

Losing Pouncey is huge, as he was hurt by his own player when right guard David DeCastro fell onto Pouncey on the first drive that ended for the Steelers when Isaac Redman fumbled in the end zone.

Kelvin Beachum filled in for Pouncey at center, but clearly nothing has been decided on the future of the position for the now 0-1 Steelers.

“The job hasn’t been given to me,” Beachum said. “We’ll find out what’s going down [today] after the film.”

Wilson was last with the Panthers back in 2011.

Needless to say roster moves are coming for the Steelers this week.