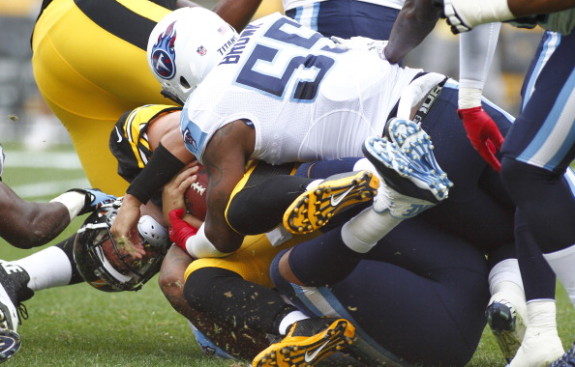 There was no doubt the Steelers were going to fall in the Power Rankings this past week, and sure enough ESPN has the Steelers from 16 to 23 after a 16-9 loss to the Titans.

Here’s what ESPN has to say about the Steelers and their effort from Sunday.

“Pittsburgh had 15 rushes for 32 yards in the opener, and lost center Maurkice Pouncey and running back LaRod Stephens-Howling with torn ACLs. Not a good start.”

There’s no doubt with injuries to Pouncey and Stephens-Howling, not to mention Larry Foote, have the Steelers up against the 8-ball moving forward.

The team simply didn’t look good vs the Titans, and still through four preseason games and one regular season game, the team has one offensive TD in the preseason and one which was very late in the game vs the Titans.

Nothing could get them moved up the ladder more than a win vs the Bengals – but right now that’s hard to think about with all the things that went wrong Sunday.

Steelers 2013 Scouting Report Week Two: Cincinnati Bengals
Video: How Much Trouble Are The Steelers In?