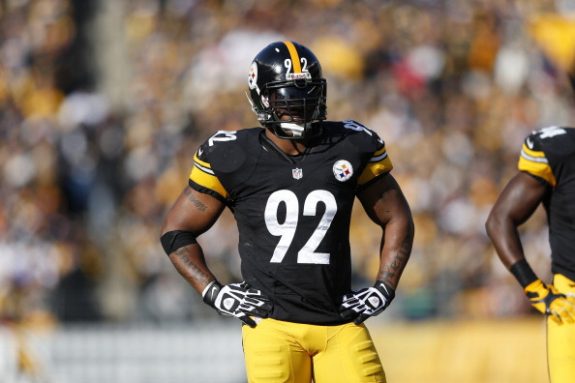 This offseason the Steelers and LB James Harrison could not agree on a restructured deal, and he eventually was released by the black and gold.

Many felt that losing Harrison was a bigger blow for the Steelers than losing just another player, as he played every game with a chip on his shoulder.

Harrison spent nine long seasons with the Steelers, and won the NFL Defensive Player of the Year award in 2008 as the Steelers won Super Bowl XLIII.

The Steelers let Harrison go in the midst of a six-year deal that was to pay him $51.174 million.

Monday night the Steelers will see Harrison for the first time in an opposing uniform, as he took his talents to the Queen City, now playing with the Bengals.

New Steelers LB Jarvis Jones gave kudos to Harrison when asked about him, being on the opposite sideline watching him in stripes.

“He’s vicious,” Jones said. “Strong, way stronger than I’ll ever be. And he’s physical. I’m not saying that I’m not physical, but we’ve just got two different styles of play.

“I think I use my hands a lot more than him. He’s more just legs and upper-body strength. He likes to overpower people, but I’m just more … not finesse, but I like to do my steps and use my hands and more technique.”

Already cash strapped entering the offseason, the Steelers simply could not afford the $6.53 million they would have owed Harrison for 2013.

Many felt that Harrison, who the Steelers stood by through thick and thin with should have accepted a pay cut that could have kept him playing opposite LaMarr Woodley.

The Bengals seem happy to have Harrison, including his new coach, Marvin Lewis.

“He’s been a great pro and a great role model for our defensive football team because they watch how he comes to work and goes about his business,” Lewis said. “It’s been really another confirmation of how you do it.”

A player that will have to look into Harrison’s eyes on Monday night is QB Ben Roethlisberger, and the QB who was beat up in the loss to the Titans Sunday at home says it’s awkward seeing him with the Bengals.

“It’s already different watching film and seeing him in a different uniform,” Roethlisberger said. “I’m sure he’ll have his black visor on so we won’t be able to see his face too well.”

When it comes to if Harrison truly could have stayed with the Steelers or not, he said regarding the talks – “There are only a few people that know exactly what was going on in those negotiations.”

Harrison is one of those rare players that rose from the ashes of playing on the practice squad and getting released to being a star in the game.

Monday night, he’ll try to make his mark again. Many felt it didn’t need to come to that if Harrison had not been greedy in the offseason, to which he says isn’t the case at all.

“I knew when we first started talking and negotiating that things didn’t look like I was going to end up there,” Harrison said Thursday during a conference call with Pittsburgh reporters.

Steelers At Bengals: Three Players To Watch From Cincinnati
Steelers And Sports And Exhibition Authority Looking To End Dispute Over Seats