Monday’s “X-Factor” – Who Will It Be In The Steelers-Bengals Battle? 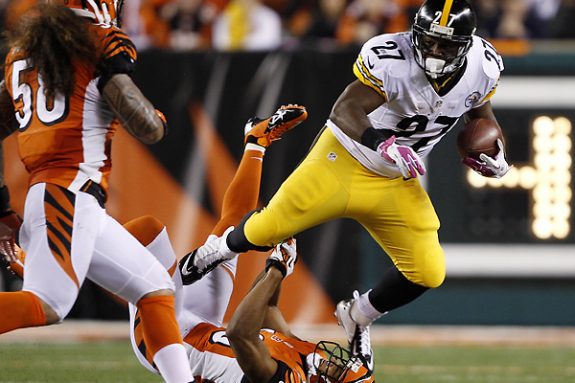 It happens every week, as a player (or two) steps up and play a role bigger than you thought entering that game.

Today on SteelersGab, two days until the Steelers second game of 2013 with the Bengals, we take a look at a couple players that could step up on either side and play a bigger role than expected.

1. Jarvis Jones LB Steelers – The Steelers 2013 first round pick gets his first NFL start, and with the amount of plays he’s already made in the preseason and the hit on Chris Johnson in the opener, is there any question this player could be a difference maker Monday night? Jones is a big hitter and could be a game-changer if he can create a couple of turnovers in the Steelers favor.

2. Tyler Eifert TE Bengals – The Bengals 1st round pick in 2013, he could give the Steelers serious issues, more so if he and the Bengals go to the two TE set with Jermaine Gresham. Last week the pair had a total of 10 catches, and Eifert seems to quickly be getting comfortable with Andy Dalton. He’s a weapon the Bengals will use and use a lot.

3. Jonathan Dwyer RB Steelers – I know, I know, clearly I am reaching here with a guy the Steelers cut, then brought back in desperate measures. But, take into consideration that Dwyer last year vs the Bengals in Cincy he had 122 yards on 17 carries in a huge Sunday night win. How nice would it be if the Steelers gave him the ball a bunch, and if he delivered like he did last season. A longshot, but right now this offense has nowhere to go but up.

4. James Harrison LB Bengals – What a dream it would be for Harrison to come back against this old team and make some big plays against Mike Tomlin and company. Harrison was mostly a non-factor vs the Bears a week ago, making just one tackle. It’s going to be up to a very maligned offensive line to try and old down Harrison, who will have plenty of fire to play his old team. Let’s hope the emotion for Harrison takes him out of his game, and maybe takes a bad penalty or two.