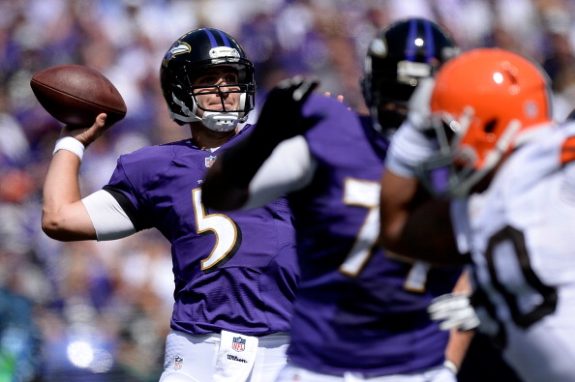 The Browns and Ravens played in week two today, as it was the Ravens opener as they were able to hoist their Super Bowl flag from last seasons win over the Niners.

The game itself should make Steelers fans happy, as even though the Ravens won 14-6, neither team looked all that impressive, and hopefully it will allow the Steelers to get on track and matchup well with the Ravens.

Joe Flacco and the Ravens trailed 6-0 at the half, but their defense stepped up against the awful Browns offense, holding them to no points in the second half.

Browns QB Brandon Weeden and the ‘new look’ Browns offense is about as bad as its always been. Today Weeden, who left late with a thumb injury was 21-for-33 for 227 yards.

He was basically ineffective as the Browns kicked two field goals in the first half, and that was it.

Flacco was 22-for-33 for 211 yards with a touchdown that put the Ravens up 14-6. Bernard Pierce scored the other Ravens TD to make it 7-6 in the third quarter.

The Ravens are now 1-1, while the Browns, who look like no more than a 4-5 win team, are 0-2 and will play in Minnesota next week.