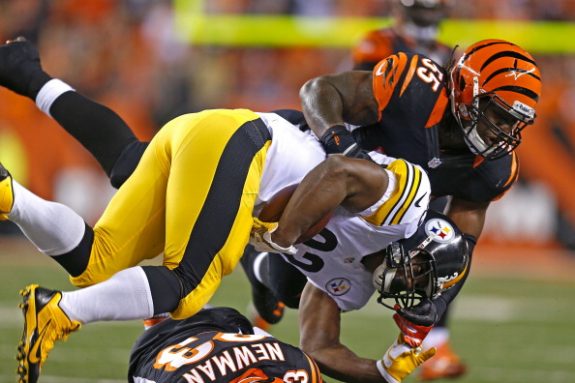 By Tyler Sweet
Needless to say, the Pittsburgh Steelers are in a lot of trouble right now.  Is the season over?  No.  Should Steeler Nation panic?  Not yet.  Should we be concerned?  Yes!  I understand that 0-2 is not the way any team wants to start their season, in fact if you go back to the preseason, the Steelers are 0-6.  But the good news (or perhaps bad news) is that there are still 14 games left in the season.  Listening to media and fans through Facebook, Twitter, and different blogs such as this, the lack of trust and confidence that people have in this team right now is incredible.  The worst part about writing these report cards, is the fact that I have to relive last nights game and expose the entire team for what it really is.  Take a look at what I gave each unit this week.
Offense
My observation of the offensive unit throughout the preseason and the first two games of the regular season, is the lack of excitement or fire if you will.  Its Monday Night Football for crying out loud!  In the past, the Steelers have had players that seem to motivate the offense and povide a spark both on and off the field.  From Jerome Bettis’ high stepping and screaming, to Hines Ward’s big blocks and incredible competitive fire, this 2013 offensive unit is trying to find an identity and someone to lead the charge.
Last night, the run game was horrendous and Ben missed several throws that would have resulted in big gains.  Of the group of runningbacks that we have right now, I believe Felix Jones is the best option and he had a decent game (for what its worth).  When the Steelers did move the ball, once again penalties and a fumble by Paulson deep in Cincinnati territory killed any momentum they may have had.  This unit has had issues from week 1 of preseason and has shown little improvement since then.  Turnovers in key moments of the game, no run game, penalties, I could go on all night.
Offensive Unit Grade: D
Defense
The defense has played solid all preseason and regular season.  With the offense playing the way they are right now, the defense has to be more than ‘solid’, they need to be spectacular.  For the most part, the Steelers kept AJ Green and the other Bengals receivers in check and did not allow him to get the ball down field.  A breakdown in coverage resulted in several big plays by both Tyler Eifert and Jermaine Gresham.
The biggest problem I have in the defense is the lack of turnovers and big plays.  Andy Dalton had an average game, missing multiple throws.  I counted 4 tipped balls that ended up hitting the turf.  For the Steelers to be successful, they need to stop the opponents drives and force turnovers.  When the team looked for a big stop late in the fourth quarter, Lamarr Woodley gets called for offsides, giving the Bengals 1st and Goal.  A good defense right now will not cut it for Pittsburgh, this defense needs to find ways to win games and limit the mistakes.
Defensive Unit Grade:  B
Special Teams
The game started very well for the special teams unit.  Good blocks led to a couple great returns setting the offense up with a short field.  On coverage, Jarvis Jones and company were aggressive but stayed in their lanes and were quick to take down the returner.  The only bad moment the special teams unit seemed to have had was Antonio Brown taking a loss on a punt return, which in my opinion was his attempt to make a big play in a game that was obviously not going the Steelers way.  Overall a pretty good outing by special teams.
Special Teams Grade: B+
Coaching
By request I have included the coaching category on my weekly report card!  I want you the readers to fill this section out yourselves.  From what I have heard the past 24 hours from fans is a lack of trust in this current coaching staff.  Tell me what you think!
Coaching Grade: ?
We are only two weeks into the season and many fans have already folded their Terrible Towels for the year.  This team has issues right now but lets hope we have seen the worst of it.
I thoroughly enjoyed reading your comments on all our Steelers Gab outlets.  Whether it be on our website, our Facebook page, or Twitter account, the driving force behind it all is you the readers!  Keep the comments and your grades coming!  Follow us on Twitter: @SteelersGab or you can follow me @Tylersweet87
Related Topics