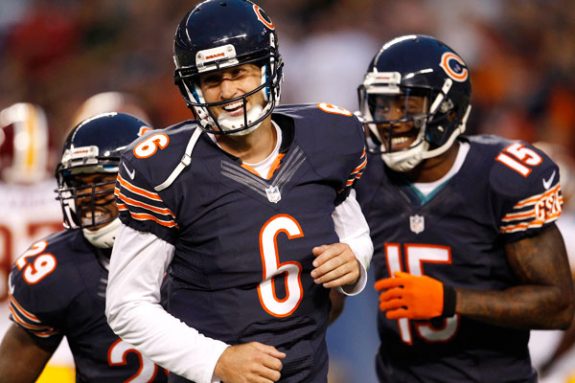 It’s week three and the Steelers are back on National TV, taking on the 2-0 Chicago Bears. The Steelers thus far have been rather awful, scoring two TD’s in two games, and really getting nothing going in the run game.

They will try to do that, as well as slow down Jay Cutler and the Bears, who on offense have been very good in their two wins over the Bengals and Vikings.

Here’s our three keys to the Steelers avoiding their first 0-3 start since 2001, and also our final prediction for if this team is going to get a win.

1. Have a Plan – Sounds simple, but it seems the last two weeks the Steelers plan on offense has been a wing and a prayer. Hopefully with a week with TE Heath Miller back, the club will be a little more consistent, though I wouldn’t expect a ton from him. As for Ben and the WR’s, they had better be better than last week, and no more sideline blowups between the star WR and offensive coordinator.

2. Don’t Play Scared – The team is 0-2, and it’s a fact that the team has overcome 0-2 starts a couple times to make the postseason, including 1993 and more recently, 2002. The team plays better when they are confident, and this week it’s time to start playing with some swagger again, instead of looking like a team playing for a high draft choice in 2014.

3. Jump Out Early – Last week the team was up 3-0 and could have been up more if it were not for the David Paulson fumble at the Cincy 13. It seemed before the fumble things were going the Steelers way, and they were ready to go up 6 or 10 to nothing. Instead, they were back on their heels, and while it was 10-10 at the half, it seemed they blew a golden chance to have a big early lead. If that chance presents itself again, they have to take it.

Prediction – I think this is finally the week. The Bears are 2-0, but last week Jay Cutler threw three picks, and lost a fumble that was returned for a TD. There is no doubt that the Bears are not a perfect team, and with the Steelers playing for their lives, they need to do whatever it takes to win the game. I think they will get some short fields, and the black and gold will have a bigger night finally on offense to secure a much needed win to hopefully start to get 2013 back on track. Steelers 19 Bears 10