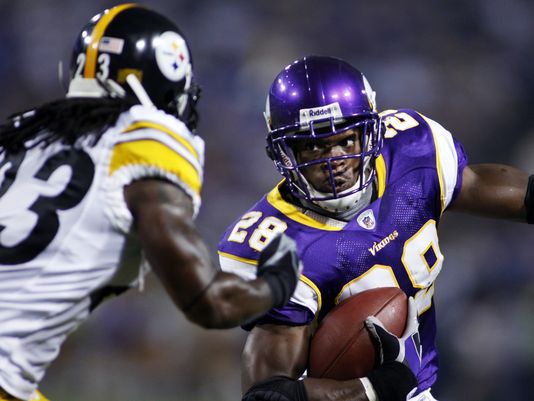 It’s off to London for the Steelers, as already in an 0-3 hole, this week they will take on the Minnesota Vikings, another 0-3 team.

The Vikings have been brutal, including losing a game to the awful Browns at home last week to third-string QB Bran Hoyer.

Here’s a couple things to look for about the Vikings in today’s scouting report to get ready for Sunday’s game.

1. Ponder’s Pretty Pitful – Vikings fans seem to want QB Christian Ponder’s head on a pole these days, as he’s been pretty bad through three games for the Vikings, all losses. Ponder has two Td’s to five picks, and one thing the Steelers have to watch for is he will take off, which he did a couple times for two scores vs the Browns last week. He’s not a threat to the Steelers, and they should be able to shot him down.

2. The Defensive Backfield can be Beat – Last week Hoyer and the Browns threw all over the place, and one player that had a big game was TE Jordan Cameron, which means if you have Heath Miller on your fantasy team, PLAY HIM! The corners are another group that can be had, with starters Josh Robinson and Chris Cook. The Vikings do put up points, been have been giving up plenty this year so far.

3. AP Still Can Break Big Plays – Last season Adrian Peterson was fantastic, and seemed to carry the Vikings to the playoffs all on his own. This season has been a different story, as he has rushed for 281 yards on 69 carries this season. The Steelers still have to make tackles and not let AP get loose, and he can run over defenders as well, just ask Williams Gay. The Steelers always did well bottling up Barry Sanders in his prime when he was running over everyone, and they need to do that with AP as well.

4. Kyle Rudolph is a Threat – When Ponder gets in trouble, he will look to tight end Kyle Rudolph, as he’s one of the better receiving TE’s in the NFL. The Steelers will have to make sure to keep a LB watching him, as he’s a guy that can get downfield and make catches. Last season he was great in the red zone for the Vikings, while this season he has 10 catches for 97 yards with a score. Ponder looked for Rudolph eight times last week.

5. You Can Create Turnovers Vs Minnesota – The Vikings are even in the giveaway/takeaway ratio so far in 2013, and while the Steelers are on a historic pace for giving the ball away, this week sure would be a good time for them to get their first turnover. A couple times last week the Vikings had chances to score, but they put the ball on the ground. At this point, it seems the Steelers can go nowhere but up as far as the giveaway/takeaway ratio is concerned.