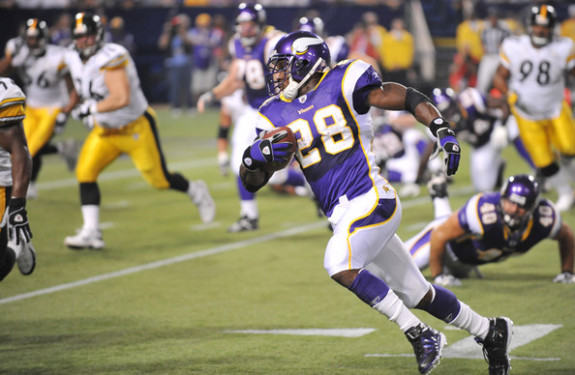 This week the boys are in London to take on the Vikings, a fellow 0-3 team that it looks like the Steelers can take advantage of.

The Vikings will go with their backup QB in Matt Cassel and the Steelers will try whatever it takes to come back to the states with a win.

Here’s our three keys to the Steelers avoiding an 0-4 start, and also our final prediction for if this team is going to get a win.

1. Bottle Up AP – Vikings RB Adrian Peterson ran for a 78-yard touchdown on his first carry of the season, but he’s since averaged just 2.9 yards per rush. The Steelers have to make sure to put the pressure on Cassel and not allow AP to go off for a big game. If they hold Peterson to 80 yards or less, it gives the Steelers a great chance to leave London with a win.

2. Turnovers – Pretty simple, the Steelers have been awful in this department in 2013, giving up the ball at a historic rate. Ben Roethlisberger finished 26 of 41 for 406 yards against Chicago last wee, but his turnovers played a huge role in the loss, and he can’t press and has to take care of the ball. This team has got to force mistakes, something they have not done, and hold on to the ball for once.

3. Confuse Cassel – The Steelers lost a game to Cassel back in the 2009 season when he was on an even worse Chiefs team, that day he threw for two scores and the Steelers lost in OT 27-24. They have to throw the Dick LeBeau book at him, and make sure not to let him get settled in the pocket. An early turnover or two would go a long way in doing that.

Prediction – Only five of the 161 clubs to lose three straight to open a season since 1978 have reached the postseason, and the Steelers have not started a season 0-4 since 1968. History here means nothing, and while it’s really too early to even think of making the postseason, they will find a way to walk out of London with a win. Look for the offense to score 24-27 points, and for the Vikings to struggle for 14. Steelers 24 Vikings 14