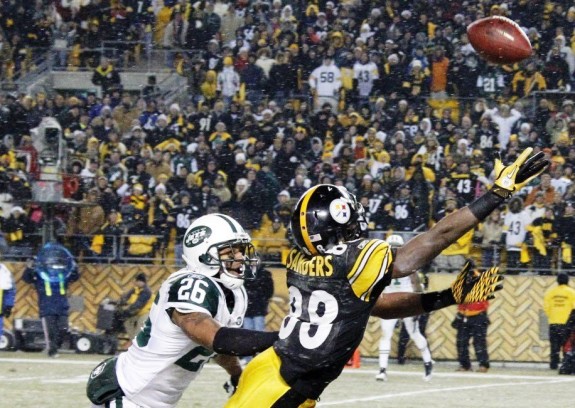 After a week off the Steelers are going to try and finally score their first win of the 2013 season as they take on the Jets Sunday.

The team got a week to sit back and try and see what some of the problems were, and they are hoping that with some changes to the lineup they will have a better idea on how to combat the Jets.

Here’s our official preview for the matchup with the Jets, and who we think will walk away with a win.

1. Make Geno Uncomfortable – The Jets are going to be without leading pass catcher Kellen Winslow, and with the way Dick LeBeau draws up defenses, the Steelers D should be able to do what they want against Smith and the Jets pass game. You have to respect they will try and go downfield, but LeBeau is a lifetime 15-2 against rookie QB’s, and they need to make him confused about coverages.

2. Play Fast – Seems that when the Steelers offense has been in tune, it’s been when the unit is moving quickly and trying to get downfield. The passing game is the strength of the team, and they need to use that against a Jets team that will try to get to Ben and make him feel the heat with different up front looks. The Steelers wide outs need to make catches and then make plays when they have the ball.

3. Out Physical The Jets – Rex Ryan and his band of green always seem to stress hitting and playing good D, no matter how good or bad they are. The Steelers on the other hand don’t seem to have that same look about them with their defense, and it shows with how easily at times team seem to be able to grind out those big 1-2 yards. It’s time for the defense to play with attitude, or this team will be 0-5.

Prediction – I have a sneaking feeling the week off with the Jets on a high after a short week is going to work more in the Steelers favor then some think. While this team has a ton of work to do in order to get the 2013 season turned around, a win in the Meadowlands can get things going in the right direction, and here’s thinking they will find a way for two TD’s, two FG’s, and their first two turnovers of 2013. Steelers 20 Jets 14