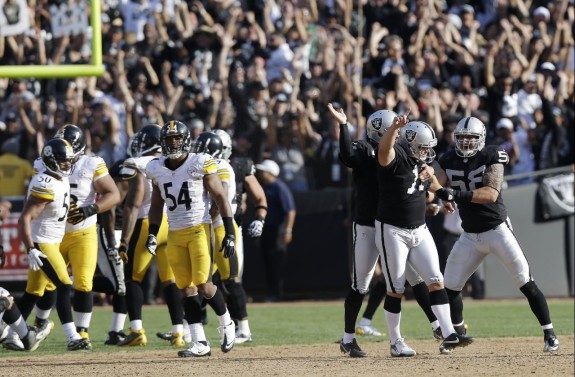 Last week the Steelers turned their season back around with a huge 19-16 win over the Ravens on the final play of the game with a 42-yard field goal from kicker Shaun Suisham.

This week the team plays at Oakland, a place they haven’t play well in for the last 7 seasons. The team lost a game there in 2006 after their Super Bowl win in 2005, and another last season after being up 10 in the final quarter.

Now at 2-4, it’s more critical than ever that the team doesn’t lose focus and again go out on the coast and lose what would be a huge loss.

Here’s our official game preview with our prediction below.

1. Stay Grounded – The Steelers are coming off a season-high 141 yards rushing vs. Ravens a week ago, and against a much better, more physical Raiders D, they have to duplicate those efforts. Oakland got the Steelers into a shootout last season, and eventually had three more points in them than the Steelers. This time around, it would benefit the Steelers a lot to slow the game down and pound the Raiders defense with their run game.

2. Pound Pryor – Thus far in 2013, Raiders QB Terrelle Pryor has won both home starts, completing 70.2 percent of passes with 105.5 rating. He seems to be a lot more comfortable at home, and leads the team in rushing, which means like Geno Smith, the Steelers have to be aware of him taking off. Dick LeBeau may want to duplicate the game plan from two weeks ago, and see if he can confuse Pryor into mistakes and make him step up in the pocket, not outside where he can use his legs to hurt the Steelers.

3. Red Zone Woes – The Steelers have been downright brutal in the red zone so far this season, scoring TD’s in 16 chances inside the 20, second worst in NFL to Jacksonville. The team could have clinched the win last week if Derrick Moye would have pulled in a perfectly thrown TD pass, but instead he dropped it, which kept Baltimore in the game. If the Steelers get a couple shots deep in Oakland territory, they need to score TD’s and not just field goals.

Prediction: For whatever reason the Steelers have not played well in Oakland the last two times to teams they were clearly better than. This time I think they are on a bit of a roll, and will not be overconfident and won’t overlook Oakland. The Raiders have been simply awful after the bye, and I think the black and gold on defense will have enough to stop Pryor and the Oakland offense to get a win and get to 3-4 setting up a huge week 9 game in New England. Pittsburgh 23 Oakland 13