Tomlin Comments On The Loss To Oakland – “Too Many Errors Early” 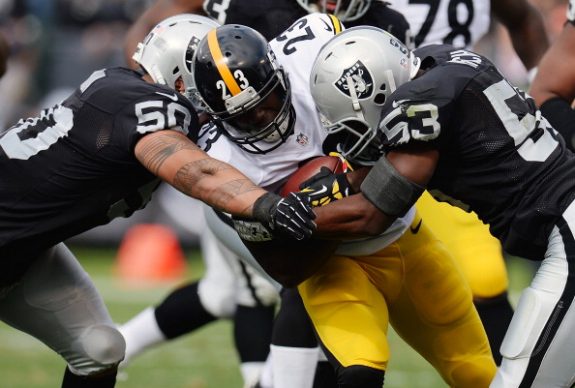 Opening Remarks: Too many errors early on to give ourselves a legitimate chance. We allowed them to control and dictate the flow of the game with how we started really in all three phases. The first 30 minutes of football was poor on our part and I take responsibility for that. It starts with me. We can’t choose to defer on a kickoff and allow them to explode and spot them seven on the first play of the game. We had a partially blocked punt. We had other opportunities in the kicking game to get the ball in the first half. The ball rolled around on the ground and we weren’t able to do it and we weren’t able to establish enough rhythm offensively to sustain drives. We missed point opportunities with our field goal unit. All of those things came up to bite us as we worked down the last 30 minutes of the game. I liked the effort, but it’s not effort-oriented. We expect that. It’s result-oriented and we didn’t get it done today, partially because of the way we started the football game. On the injury front Ramon Foster sustained a concussion early on and was unable to return. Guy Whimper has a left knee injury that needs to be and will be evaluated. David DeCastro has a right ankle injury that needs to be and will be evaluated. Other than that I am sure there are bumps and bruises associated with playing.

What was the explanation on the punt that appeared to hit them on the leg?
They thought that our 41, (Antwon) Blake touched the ball. I didn’t, that’s why I challenged it. They thought he did.

To clarify you would have gotten possession had you won the challenge?
Yes

What happened on the first play to start the game?
It was a nice play by them, a poor play by us. Overaggressive could be a way to describe it. It resulted in a 93-yard touchdown run. I don’t want to take anything away from them. They executed the play, we did not.

You said you did not like the first 30 minutes of the game. What was the reality of it? Was the team not ready?
The reality is the proof is in the pudding. We didn’t perform well in a lot of instances in all three phases. I take responsibility for that.

You had a strong performance last week against the Ravens. How big a setback was this week?
It’s a loss. It is what it is. Performance aside, the quality of the performance. We come to win and we weren’t able to do that. Had we been able to pull the game out I still would have been disappointed in the quality of play in the first half. But make no mistake, it’s about winning.

How much did you and your defense anticipate Terrelle Pryor running?
We’ve looked at it. He has done it in every game. That has been a component of their offense. I think I led with that on Wednesday.

When you allowed the first play, you said it was a little overenthusiastic on that play?
I am not going to try and quantify it in any form or fashion. They got a 93-yard touchdown.

You said in the past under certain circumstances guys might not be here in the future. Is that a possibility going into next week?
I am not going paint with a broad brush. The first thing I am going to do is get back and evaluate our play here with a fine tooth comb, assess the injuries and see how we go from there. It will be a normal business process for us.

Can you talk about Shaun Suisham missing the two field goals?
We lost the game by three. We missed two makeable field goals. I am sure Shaun is a standup guy. He always has been. I am sure he takes responsibility for his actions, his part in it. There are many instances that you can point to that put us in position to win this game, or strengthen our cause in terms of winning this game, not just in the field goal area.

How hard does it get when you have so many offensive line injuries?
All of these guys are professionals and capable men. That’s how I look at it. I know that’s how they look at it. We’re not going to make excuses. Those guys in the helmet are capable of being a part of the reason why we win. We expect them to. We didn’t get it done today.

Will Guy Whimper and David DeCastro have MRIs?
I haven’t had what’s been done or what hasn’t been done to them to this point and that’s why I made the statement that I made. I am sure they are going to go through an MRI or something of that nature. I just don’t have that information as I stand here today.

Why didn’t the running game get established again?
For a lot of reasons. I will look at the tape. We weren’t able to get it done. They had a lot to do with it in terms of how they played and the game circumstances also being a part of that.